Today, I had to do not one, but two household tasks that I really abhor.

So, we washed the dishes in the sink (by we, I mean my mother, and I... my dad did not do dishes. Later, by we, I mean me, as my mother was too busy avoiding her life to actually do the dishes.) Part of doing the dishes entailed occasionally cleaning the accumulated gook out of the drain grill.

Bits of hair and soggy food.

I really, really hated doing it. It was nasty and slimy and I often had deep suspicions of what else might crawl out of the drain while I had my hand full of gross. After Thomas and I got married, we lived in one apartment for a year that didn't have a disposal. I made him clean out that gook. (We only stayed in that apartment for a year, and while I wouldn't say the entire reason we moved out was because of the lack of disposal, it was ON the list.)

These days, I won't even consider an apartment that doesn't have what I consider to be the basic amenities. (Cable ready, disposal, dishwasher, air conditioning. You know, essential things!!)

Unfortunately, there is no disposal in the bottom of my dishwasher.

Now, admittedly, I don't have to do this nearly as OFTEN as I had to scrape out the drain, but from time to time, there dishwasher gets a little clotted up, with leftover food bits stuck on a grill in the far back of the machine.

So, I had to clean it today.

The second task that I really hate came next.

I tossed this handful of cruft into the sink and ran the disposal. Whiiiiir THUNK BANG BANG THUNK.

I turned off the disposal and stopped the water. Using a spoon, I peered into the dark opening. 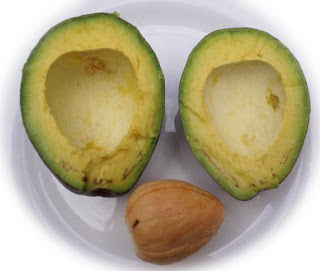 I'd eaten some avocado last night, and I'd popped the seed out into the sink.

Avocado seeds are... not small. There's no way that my disposal can manage to chew that thing up without seriously damaging the unit.

This particular task is daunting. I'm afraid of the disposal. As much as I love its usefulness, I have a Stephen Kingian phobia about the thing.

Have you ever read Firestarter? Not seen the movie, because the movie doesn't cover this little bit of nastiness, but actually read the book? In it, one of the Shop's doctors, Pynchot, is driven by Andy (the father of the main character) into insanity and eventually Pynchot commits suicide by sticking his arm into the disposal all the way to the elbow and bleeding to death. While dressed in women's underwear, just to add insult to injury.

I do, however, go flip the breaker before I fetch the seed. Which I still do, very gingerly, and as quickly as possible.

I think the disposal was laughing at me.
Posted by Lynn at 10:14 AM

::petpetpet:: Would it help that I have an unreasoning fear of the vacuum cleaner for the same reason?

I don't like disposals either. I do, however, wear women's underwear.

Should you claim this day as an NSV? I vote yes.

I had to laugh when I read your post. Even though I'm 53, I remember when I was a sophomore in high school, my parents had gone out for the evening. We kids, three of us, were always charged with cleaning up the supper dishes and kitchen.

One night, after I didn't ALSO clean the drain, my dad actually came into my bedroom and WOKE ME UP, made me get OUT OF BED and go clean that stinkin' drain.

Now, I never do that chore I don't think of that night. HA!

I feel your pain...luckily I have a metal drain catcher that i just have to pick up and flip over into the garbage can, but I'm with cammy doing hated things should be NSV days

Monday's are usually my cleaning day. I used to hate doing the dishes, but now I hate washing Olivia's bottles.

I still wish we had a dishwasher though.

Very funny--glad you turned the breaker off!

I do love Stephen King and that's a great, albeit gruesome, comparison.

Glad that you're arm is still attached (I have neither a disposal nor a dishwasher--looks like a good thing!)

LOL You are a great writer.. I loved reading your post :)

Oh my gosh, we're sisters! I HATE cleaning out the drain stuff that gathers over the strainer in the sink. I have to wear gloves when I wash dishes for just that reason. Did you ever see the Incredible Shrinking woman? That scene when she is in the disposal makes my stomach churn. I will however, put my hand in the disposal-although you're smarter than I to turn off the breaker first. And I didn't even know that I have to clean the drain in the dishwasher. I'm learning!