Our House (In the Middle of Our Street)

Felicia, over at Life Happens, is doing this photo challenge thing, and I thought I'd add to it... 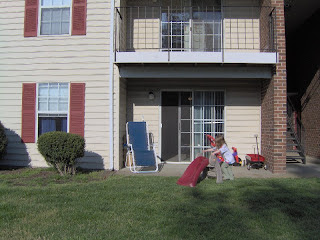 This is my apartment... Darcy came outside to run around while I was taking pictures, and she's discovered the joy of playing in spring grass with no shoes on. I checked the yard quick-like, before she came out, to make sure there wasn't any nice doggy surprises. (Leash and pet-litter laws aren't enforced with any sort of regularity... as a matter of fact, along one particular section of our walk, there's a dog pile exactly at leash length from the sidewalk, every 2 feet or so, in various states of decay...)

We've lived in this particular apartment for four years now, which is the longest I've lived in any particular place previous. Our old apartment - which I miss dreadfully on some days - was the second longest, clocking in at three years.

It's a fairly nice neighborhood... for the most part. We've got a couple of vandals who come by once in a while to spray white spray paint over the cars in the lot (usually around Halloween) but whatever they use just wipes off with a little bit of Windex. Annoying, but not criminally so. And a few times, someone's set the trashcans in the laundry room on fire. Couple of months back, someone went through the parking lot and stole everything out of everyone's cars that was of value and not locked up. (They opened the doors on our car, but didn't bother to steal any of the clutter we have in the car... our locks don't work so well, so we don't use them. But we don't leave anything in the car of value, except for the carseat, and I seriously doubt any teenage thief is going to cart away an Alpha Omega. 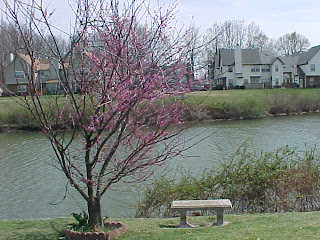 This is our walk... I really love it, actually. The whole circuit is fairly nice, and except for a bit of a stretch along the main road, rather peaceful.

Well, except for yesterday, when a whole passel of idiot-children decided it would be loads of fun to harass a pair of nesting Canadian geese. I don't know why they thought this was a good plan... Canadian geese are NOT small birds, and they will attack you; especially if you're too close to their eggs.

Also, in Virginia, it's against the law to hurt these animals. I don't actually have any documented evidence of that, just anecdotal, usually stories about how a pair of nesting geese put their eggs someplace inconvenient (like in front of the door at Thomas's work) and Animal Control said it was illegal to 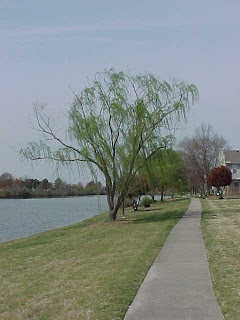 move the eggs or kill the birds, despite the fact that the geese were charging workers and actually pecked one lady rather hard...)

What I'm working on

I want to start running the Couch to 5K program as soon as my iPod comes in - I'm not very good at judging distances, so I thought I'd listen to the running music that has the times in it as a way to get started.

My friend, with whom I was discussing this plan, says I'm crazy. She'll be as supportive as she can be... from the car.

However, six years ago, I woke up from surgery to my doctor telling me, "Mrs. C., it's very possible that you may never walk again. I want you to be extra careful while you're in a cast. No weight on that ankle. Ever. At all. If we're really careful, we may be able to recover some minimal movement, enough for you to walk with a limp. But you'll probably be in pain for the rest of your life."

I was careful. I was so careful, I barely got off the sofa at all for the better part of six months. I worked very hard at my physical therapy and eventually I was able to walk without a crutch or cane. But I was in pain, for quite a long time. And I couldn't take stairs normally.

I thought that was as good as it was going to get.

Just recently, I've found out that he was wrong. I'm not in pain; not most of the time. I can walk down stairs normally. I can run.

And in the few short runs I've done so far, I've discovered something amazing.

The simple fact that I can do it means I want to.

Email ThisBlogThis!Share to TwitterShare to FacebookShare to Pinterest
Labels: Couch to 5 K, focus on self, history, motivational, pictures

Thank you for sharing your corner of the world! You have a lovely area in which to walk.

I know with absolute certainty that you CAN run. Whether or not you'll enjoy it is another story, but you CAN do it.

That gave me a lump in my throat. Of course you can do it! And if you don't like it, that's also fine.

I also did my house pictures today... You live in a much nicer area than I do!

My husband and I will have a good giggle about your unlocked cars tonight. It's an alien concept for us, who have to pay people to watch our cars when we're out in public! And every morning I see glass in my neighbourhood where cars have been broken into. Both our cars have satellite tracking devices and panic buttons in case of hijacking!

OH these are wonderful! It is so neat to "see" where you live!! Your little one looks like she is having great fun in the grass! Its so GREEN! lol

As for running. OF COURSE YOU CAN!! I don't think you are crazy at all!! I cant wait to read all about your running adventures!!

Thanks for participating in the Fun Photo Challenge!!

You have a WONDERFUL weekend ok!!

I'm SO proud of you for your decision to begin running! GOOD FOR YOU!

You walk/path sure is pretty! I just noticed your 20lbs gone badge..that is awesome!!! Great job..how exciting!

What beautiful pictures, especially of your walking area. thanks for sharing.

I'm doing the mental work to get ready to run, too.

"I can" are about the two most empowering words in the whole world. You can totally do it and you're a total rock star for knowing it and owning it. Baby steps...do what you can and work up to more. Before you know it, you'll be running a 5K! :-)