So, I've been walking daily - except Sunday. Seems like it would be a good plan to take one day off; sleep late, and rest. 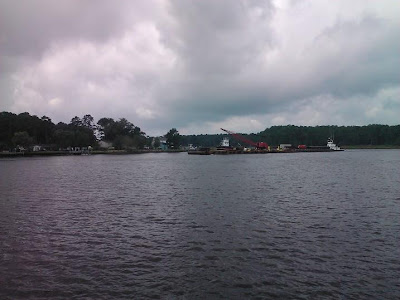 Saturday, Thomas and I went for a long walk - all the way down to the Marina and back. Why yes, we have a boat slip in our community... not that I have a boat, or even want a boat, but the point remains that I could have a boat. If, you know, I wanted one. Here's a lovely view of the Elizabeth River from the dock...

We walked a little over three and a half miles and admired all the McMansions that are in the back end of our community. The main road of our village is U shaped, and there are several smaller roads that go off of that U that are all considered part of the community. And all the way in the back, down the longest of the of the side roads, there's the Marina, and the Private Road. There's about seven houses off that private road, and we couldn't really see them very well; each of those has its own private boat slip, but not much yard. And honestly, they all looked the same from what we could see. 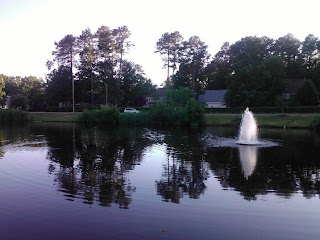 Because there are more people who are out on the sidewalks, there aren't as many wild animals - that we've found. Darcy has complained a bit that she misses the family of muskrats that live near our old place. Although we have found there are hundreds of turtles and large fish in this pond. We've gone over a few times with stale bread and frozen vegetables to feed the inhabitants.

And today, I discovered that there's a different sort of wild animal around here... the ferocious yap-dog.

Damn tea-cup sized dog wrapped its leash around my leg and bit the back of my calf. Twice.

And the owner decided to yell at ME about it?

Excuse me, lady, you're the one who can't control your rat on a string.

I'm trying a couple of things new, this time around.

First off, I don't really care how much I weigh. I don't want to know the number. I don't want to think about that. The number doesn't make me happy. It never has. It was never enough, it was always too slow, or it wasn't as much as last week, or even though I had a good week, Thomas would have a better week. (That always happened... if I lost 4 pounds in one week, Thomas would lose 7. And I know it's not fair to compare, but fuck it, I do it anyway. Did someone sign a contract with you that said life was fair? No, me either.)

Never made me happy. Ever.

So, I'm not weighing in. You won't see the "I lost 10 pounds!" over here. Because in the end, it does not matter. I'm not going to be happy with that number, so that number is fucking irrelevant. I'm not setting goal weights or goal sizes, or anything like that.

My plan is to eat well and exercise and what happens, happens.

I have walked over 10 miles since Wednesday. Gold Star.

I have logged my food - I do still have to count calories because I am NOT good at "intuitive eating" yet - every day. Gold Star.

I am also doing something a friend called "Front Loading."

Apparently we start out with a given amount of willpower each day - according to the friend - and as we go through our day, we use it up. We resist the muffin for breakfast, or the ice cream in the afternoon, and by 9pm we eat a whole bag of chips.

The idea is to Front Load my day; to not use all my willpower up at the beginning of the day. To eat between 35 - 50% of my daily allotted calories FOR breakfast.

I'm not trying to limit my fat intake, as long as it's fat from a natural source (meat, eggs, etc). I'm not trying to stack fiber. I am trying to increase my vegetables/fruits and protein and cut down on boxed or pre-packaged food.

I'm also doing my workouts first thing. I get up, get the kiddo ready for school and get into my workout clothes. I take her to the bus-stop and as soon as she gets on the bus, I head out for my walk. I'm home by 8:30 and I eat breakfast, and I still have all the rest of my day to get things done without feeling like anything is hanging over my head.

It sounds weird to say it, and god knows I get shit for it like you wouldn't believe, or maybe you would.

I lost 87 pounds, or thereabouts. And I wanted to think that I didn't have unrealistic expectations. I never thought I'd be hollywoodesque or suddenly beautiful. But I did think, MAYBE, it wasn't a terrible thing to hope I wouldn't hate myself so much.

But I did, and I begin to think, at 40, that's a trick this old dog isn't going to learn. I don't even know that it's possible for me to stop hating myself.

And on top of that, I ended up with problems; unwanted attention.

See, I used to have this neighbor. Bob.

And Bob was a drunken asshole. I don't think I ever saw the man sober. He lived in the apartment diagonal across the hall from us.

One day, I was outside, talking to one of the other neighborhood moms, while we were waiting for our daughters to get home from first grade - they were allowed to walk home from school, but for most of first grade, Darcy wanted me to be outside, waiting for her. Her dad would walk her over to the school sidewalk and let her go the rest of the way on her own. Small independences.

And Debbie was selling something - Pampered Chef stuff, maybe? I don't remember. I was leaning over the picnic table, looking at the brochure she had.

"Hey!" Bob tapped me. I'd like to say he tapped my shoulder, but he didn't. He stabbed me in the lower back/upper ass with his huge, blunt finger. "You look so hot, leanin' over like that, I took a picture." He shows me on his cell phone, this picture of my ass. He's seriously crowding my personal space and this guy is huge - well over six feet tall and probably a good 280 pounds. Like a linebacker who's been drinking too many beers.

"Um... yeah." I straighten up and move a little, trying to get out of his shadow. I don't like people looming over me. It's 2pm and I can already smell cheap beer and sweat.

You did... what? I laugh uncomfortably and move further away; honestly at this point I'm trying to get Debbie between me and him. She's just as uncomfortable.

"Yeah, right. You know, I'm waiting for my seven-year-old daughter to get home from first grade." I give Bob a look, but if it impacts him at all, he completely ignores it. I look away from him and start talking to Debbie. Neither of us look at Bob, or the phone, or acknowledge anything else he says. He eventually wanders away.

A few weeks later, my husband goes off to New Jersey for business for a week. And Bob starts rattling the doorknob to my apartment every time he walks by. If the door's unlocked, he opens it.

I start to feel trapped in my own house. I don't like to go out at night to take out the trash and now I NEVER go all the way down to the mailbox after dark.

Thomas gets home, and I tell him what's been going on. A few days later, Debbie asks us if we can take care of her dog for the afternoon, because she's going to be gone all day. "Sure, no problem." It's not. I don't like dogs, but Debbie's isn't too bad.

We're out walking the dog when Bob rides up, drunkenly, on his bicycle.

"That ain't your dog. Did you steal that dog?"

"I don't see that it's any of your concern," Thomas says, handing the leash over to me. "I'd like you to leave my family alone."

"You heard me." I don't know what Bob hears in Thomas's voice, but what I hear is the keys moving from Thomas's pocket to his hand. I look. He's done the Wolverine thing with his keychain; several keys poke out between his fisted knuckles. "You're harassing my wife. Don't talk to us. Don't talk to her."

Bob jumps off his bike and charges him. Thomas stands there, cool and collected. Bob tops him by a good five inches and at least a hundred pounds. I scramble to get my phone out of my pocket.

Bob ended up backing down, no punches thrown. But I thought I was going to be sick.

For this? I lost weight for this? To be treated like this? To garner this sort of attention?

It wasn't the whole reason; I got frustrated by the slow, creeping gains, the constant hunger and irritability.

But Bob scared the hell out of me.

We reported him to the apartment complex - I have serious trust issues with police, too, and I don't... technically being a douche canoe isn't against the law. And I have no faith that a police officer would take me seriously. The manager told him that he wasn't to speak to us, at all, or they'd evict him. One more complaint and he was out - we weren't the only people in the complex who'd complained about him.

I lost weight for this?