Have your Cake and Eat it, Too

Thomas's birthday is April first. (No, I'm not kidding. Really. I promise. You can probably guess how his birthday's been for him, most of his life.)

He's always been a little flaky about his birthday. Sometimes he's crabby because no one really makes a big deal out of it, and sometimes he's crabby because people do make a big deal out of it. And quite recently, his birthday's been making him feel old. Whatever. If you ask me, what he really wants is for his father to actually remember that yes, he did have a second son, and to call. If you further ask me, it's never going to happen. Thomas's dad is a big time prick, and he's not the least bit likely to change.

The last time Rick called us, it's because he mis-lined the entry in his personal phone book. He'd meant to call Thomas's older brother instead. Talk about awkward. At least I answered the phone, and had to deal with it, because you know, Rick couldn't just play it off. He had to tell me that he hadn't meant to call us at all, and blah blah blah. I swear... the time before that where Rick called us (I usually initiate some sort of contact with the man every six months or so... Thomas won't, but I feel like if there's ever going to be a sort of reconciliation, we have to maintain the lines) was two weeks after a hurricane hit our area, to see if we were ok, or if we needed anything. TWO WEEKS?? Like if there was something we needed, we hadn't gotten it already! Sheesh! Some people! 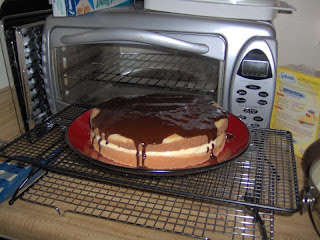 So I had to deal with Thomas being cranky about his birthday earlier this week, and then I had a party for him anyway on Saturday. (My birthday is May 1st - I am exactly 11 months older than my husband) A lot of times, our birthdays get smoshed into this sort of joint gathering, which just seems to make him feel worse... So, this year, party for him.

I did a lot of work, planning out things to serve for food that were either very low in points, or completely made from core foods. Deviled eggs are core, lemon meatballs are core, Turkish potato salad is core (so long as we didn't eat too much of it, because it has an oil in each serving!) This cake is a boston cream, and had only 234 calories and 3 grams of fat per slice. And while I've made some killer cakes before, this one really looks NICE... very professional. (I did have to make the custard filling twice because I botched it up the first time, but I had all the stuff to try again...)

I got up seriously early to start cooking, and unfortunately, didn't manage to keep to my time-table, so I didn't get to shower before everyone came over. Sigh.

Carole and Chris came down, with their two munchkins, and Leigh, Ed, and Toby all came over. Jonathon called about halfway through the party, mentioned that Toby had said there was a party, and did I mind if he stopped by. So, for the second half of the party, everyone had to tolerate Jonathon's mindless drivel, extra punctuated by "Ums" and "Ers". Don't get me wrong, Jonathon can be really fun to hang out with, but he's got some serious chemical imbalances in his brain (ADD and Aspergers) which makes having a conversation with him... difficult. It's like trying to follow some back country road that suddenly detours through Cthulu's neighborhood. I'm good with him, if I have some time to get re-adjusted to his completely random way of talking, but as we hadn't seen him for a long time - about six or eight months, I guess - it was confusing and weird all over again.

Leigh brought several varieties of full fat cheese with her, and I sliced and served. My downfall, you know, cheese. A red-light food, as Beth (my Weight Watchers' leader) would say. Once I start eating cheese, I have a hard time stopping. I made her take the leftovers with her, because I would have had no choice: either throw them out or totally blow my eating plan.

It was mostly a good party, and after mostly everyone went home, me and Thomas and Jonathon and Toby sat around for the rest of the day and watched movies. Darcy had a copy of Ice Age 2: The Meltdown which was honestly better than it should have been, so we watched that. The saber-tooth squirrel is very funny... it's almost like there's two movies, the one with Manny and Diego and Syd, and this second one with the hyperactive, much abused squirrel. It's very hard to pry Jonathon out of my house once he sets down roots, so I eventually had to throw him out at 11pm... and he STILL left behind quite a lot of trash. When we were all gaming together, I used to dock him experience points for each bit of trash he left in my house without throwing it away. SIGH.

So, Sunday I got up and started cleaning up. Which took about half the day... and even with a nap, I just did not feel rested. Finally, Sunday evening, I got around to calculating my WPAs used and how many calories I think I ate on Saturday. I think I didn't mess up too badly. ~2,000 calories and used up 17 of my flex points.

But you know, I still feel bad. For one, I'm not sure how much I ate. I think I counted each piece of cheese... (I cut them into 1/4 ounce slices - I did actually measure them!) but I might have missed. And I ate waaaaay past the "satisfied" part of my comfort zone. I was actually - that evening - into the discomfort period of "ate toooo much." Which is a little odd, and was very uncomfortable. Moreso than it was the last time I overate.

And it was raining all afternoon, so the idea of going out for a walk came up, and was then dismissed. I was feeling pretty restless, but I don't think fidgeting counts as exercise.

I'd really like this to stop happening. I've been on this lifestyle change for three months now, and really. Any time now would be good. I want to stop feeling so critical about everything. I want my life to mean more than the number on a scale, or that my 'goodness' is measured by a daily calorie count. I want to be able to accept that sometimes, it's ok to enjoy what I eat, even if it's not entirely good for me, or it's too much. That should be ok, shouldn't it? I got in my veggies, my milks (lotsa milk!), my healthy oils, protein and fiber... So why am I sitting here dreading the weigh in today? (I've actually considered bringing in my 'no weigh in' pass... but I won't. The only way to learn if I can actually splurge from time to time is find out what the damage is.)

I guess we'll see what we see... but I'm not looking forward to it. And I've already decided that I don't want to plan a birthday party for me in a few weeks. 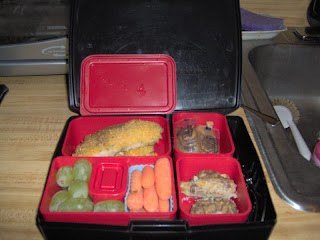 But I'll leave you with a nice picture of the new Bento box that Thomas got as a present from Leigh, and I filled it up yesterday for his lunch today.

Three halves of tilapia fillets with dijon butter and polenta. A half bar of baked oatmeal and a few sugar-free butterscotch disks on top, the last two leftover lemon meatballs, carrots, grapes, and some honey mustard dipping sauce in the little covered sauce container. Nice, huh?

I think, regarding the dissatisfaction, that's part of losing. As long as you're losing weight or still trying to, one eye is always going to be on that scale. Maintenance (so I'm told) is better... you're eating the same amounts of stuff all the time, you're more comfortable with it, and you learn what you can get away with and when. It's easier to forgive yourself because it's not about "progress" or the lack thereof. Think of maintenance as... the butterfly stage! ^_^

I'm a baaaaad cheese enabler! *hangs her head in shame*

It was a very nice party though. I didn't realize how much of the food was Core! It was all so tasty. You're making me want to give Core a chance...

Which reminds me - please please pretty please post that lemon meatball recipe? I'd have sworn Chris didn't care for it for some reason, only I said something about it to him at the party and he gave me the "what planet are you from?" look, so now I need it. ;-)