You Know What the President Can Go Do, Right? 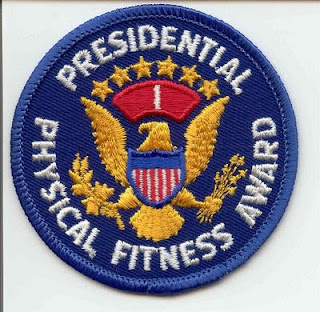 I never got one of these.

I never even got close.

Twice a year, our gym teacher would force us to run a mile, do sit ups to a stop watch, do push ups to that very same stop watch, count pull ups, do standing broad jumps, and run relays.

We never got any training on these things. We didn't practice sit ups or pull ups or do any running training. Mostly gym class was slightly more organized recess.

We put on our gym clothes (Entirely too freaking short shorts, and a cotton t-shirt both in the horrible school colors with little lions printed on them that flaked off and left yellow plastic shreds all over your legs) and were forced to do some basic stretches (toe touches. Lots of them. With our male gym teacher walking around behind us. Subtle? NOT!) and then were turned loose in the school gym where we had our choices. We could 'run laps' or play basketball or play badminton. Or volleyball, I think, was allowed. No one ever played it, though, so I can't be sure of that. Mostly the guys would play basketball (shirts vs skins; with all the girls pointing out that D____ needed to be on the shirts team, and T____ and H___ needed to be on the skins team) and the girls walked around the gym in small groups, talking about whatever it is that high school girls talk about. My gym partner and I played badminton.

Every once in a blue moon, someone would be inspecting the Coach's class, in which case we were dragged outdoors and made to play kickball (ug.) or softball (more ug) or run laps around the track. (See above about girls strolling in smallish groups.)

When class was almost over, we'd be herded back into the locker rooms to change, and Coach would "have something he needed to talk about" with the female coach and head to her office. Her office, I might add, was INSIDE the girl's locker room. In a fishbowl-type office. So, we'd all grab our clothes from our lockers and then either squeeze into the very back of the locker room (generally with other girls forming a 'body line' between us and the office windows) or take turns in the toilet stalls. No one. Ever. Showered. No matter what.

So, twice a year, we took these Presidential Academic Fitness Award tests. As far as I know, no one from my high school EVER earned one. My gym partner and I used to joke about it, wondering if Ronald Regan was doing sit ups in the Oval Office. He probably wasn't much better at it than we were.

I don't know about anyone else, but I never even bothered to try, after maybe the second year that we started doing them. I walked a mile. I'd touch my fingers to the pull up bar and stand there until Coach made me "stop". Sit ups? Pfffft. I might do three. In a minute. Push ups? Bah! Standing broad jump? Oh, maybe four inches.

There wasn't any point, really. Even when I was trying as best I could, I wasn't making even the 50% marker.

And it didn't make any difference. What we did in PE for the rest of the year wasn't based on our performances. Coach didn't expect us to succeed, and the fact that he never assisted us with any training or conditioning... well, what was he supposed to do? It's not like his JOB was getting us fit. He was the track and field coach and the only thing that mattered to the school was how the track team did. I mean, really.

I'd have loved to have math class the way we had PE. "Oh, well, you can do addition if you want to, and over here, you can work on fractions, and maybe if you feel up to it, I have some algebra. And there's a test, twice a year, on calculus, but I don't really care how you do. And neither does anyone else. Now, if you'll excuse me, I have to go coach the chess team."
Posted by Lynn at 9:01 AM

Hey! I remember these and back then I actually did earn one...it was in middle school. Back in the day when I was actually athletic. And now... they have it for the adults too you know... the Presidents Challenge and because I'm fat...I'm doing it. What the heck. http://presidentschallenge.org

LOL...amen! Sounds a lot like my experiences from gym class...sorry, P.E. Ugh. The rest of the year we played kickball maybe, or dodgeball on occasion...the only time we did anything really strenuous was the President's thing and the Jump Rope for Heart, which they made us do.

And we didn't even have a real coach, because P.E. was split between athletes - who went to the other gym with the real coaches to practice basketball or whatever - and non-athletes, who got the non-coach and the half-deflated kickball. Gah.

As much as I hated P.E. (go figure!) I never thought I'd be exercising voluntarily...life's funny sometimes. :-)

Heh... our gym class was more strenuous than that, and we didn't have lascivious teachers to worry about. (Embarrassingly ugly gym clothes, yes. But that's a given.) We actually had "units" the same as our academic classes, where we'd try out different sports for about two weeks each (you know, just long enough to figure out that maybe you liked it, not long enough to get remotely GOOD at it-- but also not a hell if it wasn't a sport you liked). Softball, touch football, floor hockey, track & field (HATED track, except for the long jump), soccer, archery (loved archery), etc.

Before the President's Fitness thingy, we'd have about two weeks of calisthenics-like stuff: practicing chin-ups, learning the proper way to do sit-ups, that sort of thing. (My favorite, ironically, was the one I sucked the most at: the rope climb.) Not that two weeks of "training" gave us geek-types a prayer at one of those patches, but hey.

Of course, the bit that amused me the most about your post was the notion of Chess Club being treated like a major sport. Ahh, geek dreams.... ;)

If they ever expand "No Child Left Behind" to include physical fitness skills like catching a ball, my son is SO screwed.

I wouldn't be shocked to see him on the chess team, though. Or maybe "It's Academic."

I never got one either.

(Re: the last paragraph) I'd never thought of gym class like that, but you're so right! What the heck? Schools would never get away with that with any other class.

The whole Presidential Physical Fitness thing was a joke for me too. For one thing, I have never, ever, in my entire life done a pull up. And you had to be able to do at least one to even qualify. So no matter how well I did on any other area, it didn't matter. No pull up, no patch.

Now, if you wanted to talk about the Presidential *Academic* Fitness award, I'm right there. Actually won one of *those*. Geeks unite!

p.s. my "word verification" word is Kdzcsnrf. Which for some reason my brain tried to pronounce. Which came out very funny and left me giggling. So thanks for the giggle!

Oh lord, don't get me started!!!
Right now, I"m just finishing up my Education program at the U of C, and I can tell you that the gym teachers I know would NEVER do taht stuff... now..
but as for the past, man. Being the fat kid was punishment enough. THen they made us play endless games of DODGEBALL (how did that help??? EXcept creating a fear of big large objects being pummelled at my head... grr) or laps... ew.
Makes me mad sometimes to think that we get blamed for being overweight, but we also grew up in a society that just didnt' give a damn. WELL I CARE NOW!!!

Sorry to hear about your experience. I am a PE teacher in a Chicago suburb and our focus is on fitness and cooperation not competition. We offer wall climbing, kayaking, yoga, Pilates, aerobics, team building, as well many of the traditional activities (modified to create greater activity). Our focus is on teaching students the value of exercise and how to best make yourself fit. Current research has finally made the connections between a healthy body and a healthy brain. A brain that is smarter and emotionally stable. My district is one of the highest achieving in the state when it comes to standardized testing and we spend just above the state average. Making kids healthy is a way to make them smart.

I can't change the past I can only do better for the future. If I were ever to meet that PE teacher I would confront him with the lost opportunity to make his students healthier, confident, and smarter.

With the help of organizations such as PE4LIFE there are many schools implementing "NEW PE" and discovering the power of PE. Programs are now designed to meet the needs of an America the needs to be healthier and smarter.

I remember them WITH DREAD too. However, like the C25K plan, it does seem a bit more do-able now. I keep thinking I need to participate in a challenge of some type because I'm getting a bit bored with my exercise routine.

I HATED gym class because I could never keep up. I wish that the idea of not competing but working with what you have could have been introduced waaaay back then (Reagan was not the president of MY youth: we're talking LBJ and Nixon, here!)