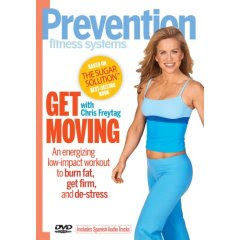 I started working out a little more than a month ago, on January 25th was my first workout, and here it is March 3. Since then, I've been working out30 minutes at a clip, three times a week, and walking 3 times a week for about 30-45 minutes.

I'm not bored with my routine yet, but I did want to go ahead and spice it up a bit, just so I don't get too set in my ways. I've Netflixed a few dvds to check out new routines and programs (sort of a try before you buy kind of thing).

The first one I got was too bouncy. I don't know if I can jump, but I do know that I don't currently feel comfortable trying. I'm not ready to try it yet. I'm still just happy that I can walk down the stairs like a normal person. If the stairs next to my apartment weren't metal, I might try walking up and down them a few times as exercise, but I'm still really in that self-conscious stage, and the stairs make this terrible ringing noise every time someone's on them (I can always keep track of the comings and goings in this complex...)

In any case, I watched and tried the second of three dvds that I've put on the netflix.

This one is a really good workout for the beginner. Don't be fooled by what you see when you sit down to watch it through the first time (I do, by the way, completely recommend watching the moves first, before you try it. This allows you to know how much space you'll need, whether or not you need any equipment, and whether or not the instructor makes you want to throttle her!) These workouts are harder than they look.

Now, that's not a criticism. They're definitely built for the slow learner, and the not-so-coordinated (like me!). Don't give me a bunch of fancy dance moves, I'll just fall over. I'm happy with step touches and knee lifts, especially if you don't get too complicated with the arm movements. I'll make the arm movements as big as you want, just don't confuse me with having knees going one way and arms doing something else entirely! I'm a klutz...

That being said, the workouts are hard. They stretch and tone and pull and push, and believe me, you'll be sweating! So, good calorie burning exercise without the added complication of feeling clumsy and stupid.

Definitely, two thumbs up. And don't forget to breathe while you lift those thumbs!

(As a down side, the dvd has one of those adverts tied into the FBI warning (pronounced fibi-warning!), so you can't just click to the menu. If you run short on patience, like I do, pop the dvd into the player before you go find your workout shoes, so that it's mostly done by the time you're ready to get moving.)

(As a further note, you'll need a set of light weight handweights, 3 - 5 pounds, a chair, and a yoga mat would be helpful. I don't have one yet, and there were a couple places where the carpet underneath me was a hazard. Guess I'll be stopping by the Play It Again Sports store again today. I swear, those guys in there give me some looks, like "what's a fat chick like you doing in here" but one day... I promise you, one day... I'll be that thin, sexy girl who thinks you're an asshole!)
Posted by Lynn at 4:09 PM

A full month of working out! Yay! Happy monthaversary!

You're doing great! I used to do the workout video thang when I first started exercising, and it worked great for me. It takes discipline, though, but it sounds like you have discipline, so no worries there!

Keep up the good work.

Sounds like a great workout! I like the idea of renting before you buy, thats a great idea!

Fabulous job on the workouts! I am still struggling with that. I may have to check out those videos though, they sound like something I could do. Thanks for the review. :)

I really hate those types of people, the ones that throw looks at you in the gym or a clothing store, or wherever. I just want to give em a swift kick in the ass.

Good for you for getting yourself moving. You're doing great! Who cares what the stupid guys working at Play it Again Sports think! It's great that there is a place to buy used exercise stuff... I may need to check our local store out.

I've only worked out once to a home DVD and learnt the same lesson you did - watch the DVD first so that you know what you're going to need. I did a Pilates DVD and it was very irritating to be told to use a rolled up towel for something when you're lying on your back doing the movement and your rolled up towel is in the bathroom!

I don't think the home pilates, and probably yoga DVD's are the best way to go, since I am all for interacting with the instructor in what are, after all, technical and very precise movements. Feedback is essential. However, I think aeorbics workouts are great for home use and one of these days I'm going to unwrap my Tae-bo videos, that I've had for a number of years now!

You are doing awesome. I have tried DVDs and have several (love Tae Bo - can't get through it though) but I won't stick to an exercise program if I am in my house....so here's a huge pat on the back!

As for the guys in the sports store, they are just checking you out. I have thought that about people too..they are looking at me like "why are you here" but have you ever turned it around and thought maybe they admire you for coming in to better yourself? Food for thought.

Oh I just noticed you are in Chesapeake. I moved back to Florida from Chesapeake/VA Bch about 5 years ago. I still go up there from time to time for work. My company is based in downtown Norfolk. I miss it up there sometimes.

Lynn, if you haven't gotten your yoga mat yet, check out the discount stores like Ross or Marshalls first. For one thing, no one will give you the stinkeye there, but more importantly, the best prices I've seen on yoga mats ANYWHERE have been at places like Marshalls. And yes, I always look. I have four, but there's always room in my heart for one more, if it's a really cool color or pattern. Target also has a nice selection of Gaiam mats in lovely colors.