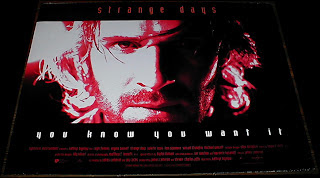 Strange Days is one of my favorite movies. (Keeping in mind that when I say favorite, I mean "One of about a hundred and fifty movies that I've watched more than five times, love to recommend to people, and given any excuse whatsoever, will make you plant your backside on my human-eating sofa and throw in the DVD player." I'm not a very exclusive person, you know. For pity's sake, I have four best friends, not including my husband, or people that I know strictly online. I don't even really have a favorite color; depending on my mood, it's mint green, dark kelly green, sometimes it's that lovely shade of dusky purple that's most like a silvery lilac, and sometimes it's bright damn orange, so... )

The plot of the movie is fairly standard cyberpunk dystopian film noir. Everything is so cold, so dark, so terriblé. (And yes, I am hearing the voice of Le Frog in my head, why do you ask?) The main character, Lenny, sells BTL chips. Ok, so they're not BTL chips (they're called SQUIDS in this movie) but you know the drill. Experience someone else's life, or something Better Than Life... I've seen loads of science fiction/cyberpunk with the same theme. Hell, even Red Dwarf has done it, and they don't take science fiction at all seriously.

Combined with this drug of the future (can anyone see that MMOs might be eventually headed in the direction of BTL chips? hehe!) is civil unrest and riots over the murder of a pop culture icon, Jericho One. Our hero (And he's not at all heroic. He's not even antiheroic, which sometimes get the cooler lines. He's a drug dealer and a pathetic husk of a man who is so wrapped up in what he thought he had that he can't see what he's got now. He's not very likable, really. He's a coward and a bastard and throws love away with both hands while reaching for something that when he finally gets it, isn't what he thought it was at all.) gets involved in the whole mess, and has to save the city from going up into flames.

(All this goes together with the fact that Michael Wincott plays the villainous crime overlord, and I adore Wincott. He's scummy and not particularly attractive, but he has that voice that just makes me weak. Yum.)

I've been living in a bit of Strange Days myself here recently...

I've only lost 15 pounds (well, perhaps only isn't the right word, but if I'm looking at a goal weight of 120 - 135 ish, I've lost about 1/7th of the total weight I will eventually need to lose) and I've got a very, very long way to go. And yet, I still feel like I'm living someone else's life.

Whose house is this where the kitchen floor is mopped every week, and the baseboards in the bathroom are clean? It's not mine. Whose refrigerator is this that contains not a single scrap of full fat and full flavor cheese? It's not mine. Where are the stacks of Buy One Get One Peeps that we should have had after Easter? Whose husband is that who's doing calisthenics in the evenings before bed? Do I know that guy? Handweights, talking about oblique stretches, knowing how much fiber is in the breakfast cereal. Where the hell did these people come from?

I'm going slowly broke on Warcraft because I haven't got the time to farm up materials for potions for raiding, so every night when we log in to raid, I have to run to the Auction House and throw down 30-50g for a flask and a few stacks of Dreaming Glory.

I have a new book on my desk; White Night by Jim Butcher. I've been waiting for it to come out in paperback since March of last year. Haven't read it. I haven't had time.

My bills are all paid. My house is clean. My dinners are pre-planned. I pack my husband a cute little lunch every day for work. My life is in order.

But sometimes I wonder...

Email ThisBlogThis!Share to TwitterShare to FacebookShare to Pinterest
Labels: commenting on life, focus on self, stress

It is your life. It's like your commitment to weight loss and exercise was one little rock tossed that's started an avalanche of good things.

(Yes, I just used "avalanche" in a happy metaphor. My only excuse is that I have a spring cold, and the metaphor-creating part of my brain must be clogged with mucus.)

Hey, if you ever want to come up and mop my kitchen floor, I've got a nice big TV, I'd let you put in any DVD you like....

Half of that post was written in paranthetical asides. (You're still you. ;) ) Only new and improved, with more life added!

Change is very surreal sometimes, I think. Even when it's good change...it's still a little crazy-making every now and again. :-)

It's still you...you're just not quite the same you that you used to be. If that makes any sense.

It's more intense I think when it results in you not being able to devote as much time to things you really love. That sort of concentrates the unreality of it all, when you're not only kicking bad habits but also letting go of some things that weren't bad, and you loved...but they just don't fit into the schedule as well. That's a bit sad-making I think.

But you're doing great things. You really are.

Hi, welcome to your life! It sounds like you're your own tour guide, so I'll let you show yourself around.

Your life will feel like your own soon ... give it time.