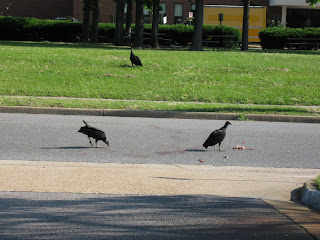 I went out for my training walk on Sunday. We used to have a cute little bunny rabbit living in our front yard - I think he nested under the shrubbery near our apartment. Anyway, this is all that was left of him the other day. And the lovely scavengers who decided to clean the road. Ug. Turkey vultures. 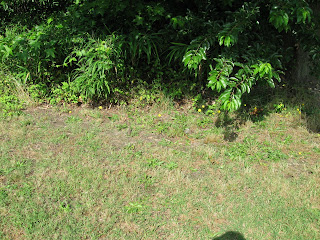 Most of the road I walk along looks like this... sidewalk, a few feet of grass, and then very thick woody areas. There are tons of wild flowers. Unfortunately, the trees are far enough back from the road that I don't get lots of shade. And I just discovered yesterday that the reason I'm getting lobstercated every weekend is that my sunblock lasts 80 minutes. Less if I'm sweaty. Ahem. That's not nearly long enough, and I can't carry it with me, the canister is too big to go in my pack. So I need to start making other sunblock arrangements before I save the world from breast cancer just to die from skin cancer. Also, my back looks quite weird from all the different tan lines I have. 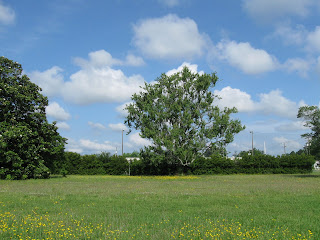 Sometimes there are fields upon fields of flowers - ok, yes, to those weird people who have to mow their own lawns, these are dandilions, but I like them. You don't have to. 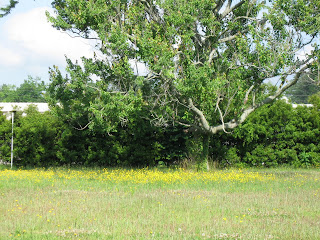 I thought this tree was particularly lovely. 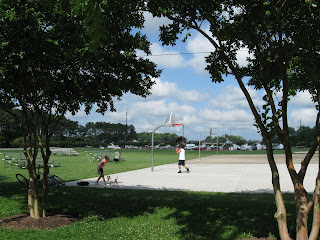 This weekend, I wanted to add like 2 miles to my walk without really going anyplace different, so I walked through two parks. This one is City Park, not to be confused with the second park, City View park. Don't ask me, I didn't name the dang places. City Park often has "events". This weekend there was an Indian PowWow and a farmer's market, neither of which I actually got to see, since I was at City Park 'round about 9:30 or so, which was at least 2 hours before either event started. 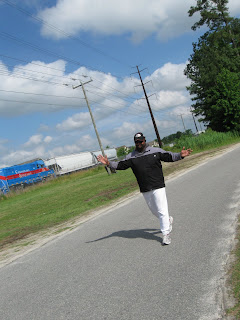 This gentleman's name is Reggie. We passed each other twice (I was going one way around the park and he was going the other way) and had a bit of conversation the second time we passed each other. He also took down my url for the 3-Day and said he was going to hit the page for a donation, at which point I said I'd give him a mention on my blog, so here he is. And if you're reading this, Reggie, it really was a pleasure talking with you! See you next weekend, maybe! 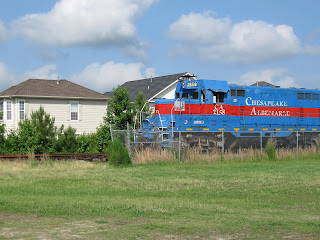 Planes, trains and automobiles... Heh. Anyway, this train was just parked there, and I rarely get to see a train so close up. I could have walked over and touched it... 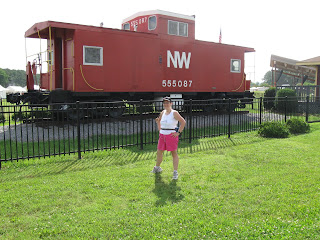 This caboose is part of the display at City Park. I'm not sure why, the signage for it is on the other side, and I didn't feel like walking all the way around the fence, which spreads over almost the entire south side of the park. Thanks Reggie for taking this picture of me in my walking gear. Even if my tongue is sticking out. I can't figure out what I was doing that my tongue is sticking out... 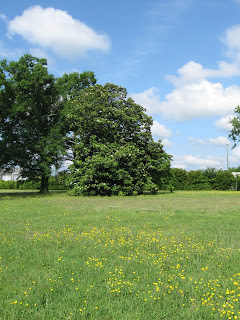 Well, they're not steel, but magnolia trees are very common in this area, especially huge ones like this. Whenever I get visitors in during the magnolia flowering season (who are not native Virginians) they comment about these trees.

I ran into this little fellow about three miles in to my walk and he let me get pretty close before he took off into the underbrush... 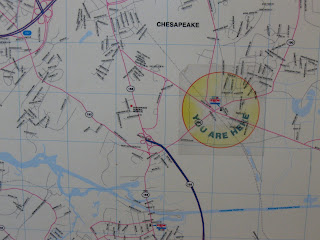 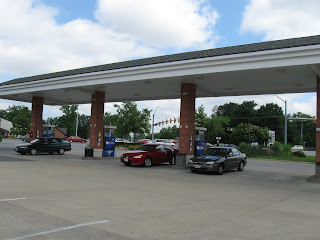 Where is here? I stopped at this Exxon for a rest break. There was a teenaged kid here, driving his mom's SUV and playing music extremely loudly, and squeeling his tires and generally acting like someone who's never been laid... I was tempted to yell at him about it. "Hey, you know they have herbal suppliments for your problem!" but decided it wasn't worth the effort. 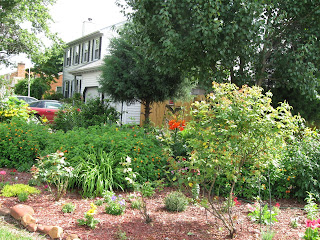 Someone's impressive garden. I don't really know anything about gardening, but I have noticed this flower bed a few times before. I guess noticing is the point, right? 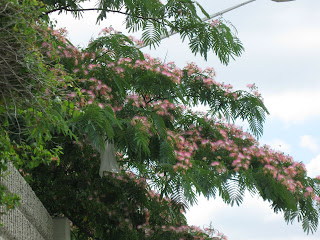 Everybody needs a thneed. 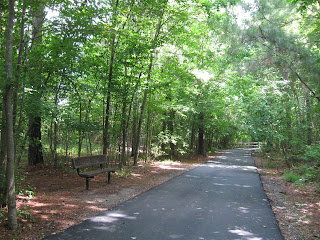 Okay, this is my second rest stop, City View Park. I walked twice around this park, since their walking path is only 1/2 mile long, but at least it's mostly shaded, so that was nice. They also have a lot of little league games being played here and a fairly large playground area. I plan on having a picnic/party here later this summer. 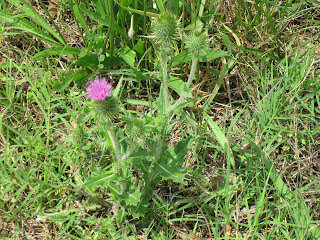 I've never actually seen a Scottish Thistle before, although I understand Sean Connery has one tattooed on his ass, I've never seen that either. 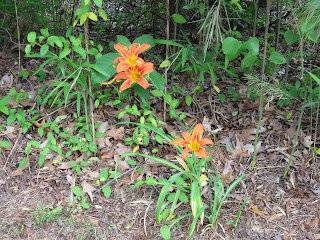 And these are my favorite sorts of flowers. There's a bunch of them growing about a mile away from my house.

(For those of you checking in for Healthy You, I'm up a pound. Getting really sick of this whole weight loss - or lack thereof - thing. Also getting a lot of "well, you're in range for your weight goal, you could just stop here..." which alternates between pissing me off and making me want to cry. I should quit? Here? "You're a size 4, what more do you want?" I want to feel good about myself. Damnit. Sorry... anyway, I'm going to give it six weeks and if I end up maintaining between 135 and 139, I'm going to be "done" and call it "good enough." and if I'm still losing, albiet slowly, I'll try and push further. But really, that's a whole nother entry.)
Posted by Lynn at 1:50 PM

Thanks for sharing the pictures! It's very pretty where you are...

When is the walk you are training for? You have beautiful path ways to walk through.

When you get close to goal, the loss really slows down because your metabolism has adjusted to your new weight. Need to shake things up a bit, maybe.

And Scottish thistles are LOVELY! We lived there for 3 years many years ago and I always loved seeing those. Never saw the one on Sean Connery's ass, though, darn it. ;-)
Path to Health

I have that song on my playlist! :)

Thank you so much for taking us on your walk with you. I might have to borrow this idea for a future post!

I'm finally figuring out that the 'feeling good about myself' thing happens from the inside out. It's a slow process, but a worthwhile effort. I wish you luck in finding peace with yourself.

that song gets randomly stuck in my head all of the time!