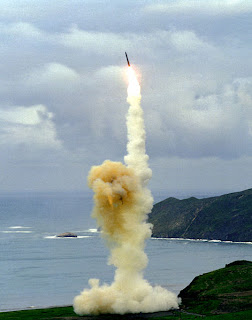 I have several habits that I would like to change (one of the things I would like to change is my habit of taking self-criticism to artistically extreme measures, and towards that end, I am not going to call these "bad habits" since they're neither good, nor bad) merely so that I can get more enjoyment out of being myself and living my life.

As I've mentioned before, one of them is to improve my self-esteem by working on the way I talk to myself, about myself, and think about myself. Seems selfish, on the one hand, but on the other, loving myself more will give me more time, since I'll be focused more on what I can do better and less time on what I haven't/can't/won't/aren't capable of doing. Or, more exactly, I will spend more time doing and less time whining. Always an improvement.

In one area, I'd particularly like to improve is this: ICBM statements. Not InterContinental Ballistic Missile (although it does often have the same sort of devastating effects on one's mental landscape) but I Can't Because My...

About two-three months back, while deep in the middle of "god, I hate that word" plateau, my Weight Watcher's leader, Beth, suggested that I might have better results if I tried the Flore Plan (now called Momentum, hehe...) Basically, when I'm on the straight Flex plan, I tend to eat 2 point crap with too much sodium, so I don't lose weight, but was the Core plan really helping anymore? Did I still know what a portion size was? Was I still listening to my body's signals? By trying the Flore plan, Beth was suggesting that I stick mainly/entirely to Core foods, but to limit myself to the number of Flex points I would get in a day.

Without hesitation, I said, "Oh, I can't do that." I had a huge pack of reasons, too. I hated tracking, I was afraid of my points and tended to horde them like some giant OCD dragon, it was such a hassel. In fact, I kept making excuses for the better part of four minutes.

Beth, who I love to pieces, looked at me. "So what you're saying is, you can't even try it." Ouch.

My first response to just about any suggestion or criticism is to deny the feasibility of that suggestion. "I can't because..." Which is, in the end, just a fancy way of saying "I'm not going to do this because I don't want to."

Changing what I say has helped me change what I think.

Instead of saying, "I can't do the Couch to 5K program because my legs hurt too much," I have altered it to "I find it difficult to manage the C25K program. How can I make it easier for myself? Or get the same amount of exercise in a different program?"

My daughter is a big fan of Blue's Clues (I think every 3-5 year old must go through this phase) and I find that I enjoy Steve and his Handy Dandy Notebook... Rather than immediately dismiss a problem as having no solution, Steve and Blue look for clues, write them down, and think of a solution.

(I'm having flashbacks to one of my favorite books; Robert Fulghum's All I Really Need to Know I Learned in Kindergarden.)

I pull out my notebook (I love notebooks, love them, love them, love them. A computer is all good and well, but there's something just extra satisfying about the physical act of writing something down...) and wrote down "C25K". And then I wrote up all the reasons I was having problems with this idea. I was getting shin-splints. I don't like being cold. I felt weird and uncomfortable running around with all my fat-girl bits jiggling. So... how could I make it better? Get better shoes? Run on a treadmill? Don't run at all, but instead do very fast walking? Start with a week .5 (instead of at week one, which alternates 60 seconds of running with 3 minutes of walking, I could start even slower; run 30 seconds and walk 2 minutes, run 30 seconds and walk 2 minutes?) In the end, I came up with a combination of solutions that have worked out pretty well for me. I am no longer trying to do C25K, but I am doing H.I.I.T. work on the treadmill, altering walking at 2.5 mph (with an incline of 6) with walking at 3.5 mph with an incline of 3. Sometimes, if I'm feeling particularly peppy about my workouts, I'll add in 60 seconds of running at 4 mph. I also started the 100 push up challenge, which gives me something different to focus on. Both of these things, I've found, I enjoy more than I did trying to do the C25K, which leads me to be less likely to give them up.

I still find myself launching an ICBM whenever someone gives me a solution to a problem; however, I find that if I let the idea simmer for a day or so, it might just be that other people do know what they're talking about...
Posted by Lynn at 1:34 PM

Email ThisBlogThis!Share to TwitterShare to FacebookShare to Pinterest
Labels: excuses, focus on self, self-esteem

Yeah, this is something I posted about today. As a society we are used to being told we can't do something. So when there is something that needs to be done, we automatically assume we cannot do it.

The challenges are great. I am getting back to the c25k and the 100 push up challenge when we return from vacation.

This is an area in my life that needs some work. Great post! Thanks Lynn

Such a great mindset. I love that you're so conscious of what could hold you back, and working so hard on ways to get around that. I keep saying the mental aspect of all this "getting healthy" business is at least 50% if not more...at least, it is if you want to stay healthy. You are SO doing all the homework!

I love your C25K solution. I had a real problem with it and I'm reluctant to try it again. I think my problem was it was just too regimented and I found myself dreading that countdown to "run time" every time. So I just started running whenever I feel ready. I don't know that I'm getting "better" at running but at least I'm running some. I think altering the speed and intensity back and forth is very good for your body, too.

And once again, we're on the same wavelength...I have a notebook fetish too. I must own about twenty of them...most I never even write in, but I love having them and thinking about all the things I could write in them...