Becoming More (or Less) Myself

I think I turned a corner somewhere in this weight-loss journey; I'm someplace I never expected to be...

I'm not lost, no, don't worry about that, just... wandering around, looking at the scenery.

I had a meltdown last week - the thing with the fudge? - and ended up doing the first serious out-of-control eating that I have done since starting this journey. And I handled it just fine. I had a gain last week, and I was fine with that, too. (In fact, to be totally honest - and what's this blog about if it's not me being honest - I was grateful that I gained. It keeps me from being seriously tempted to do it again. Consequences can be good things. There's only so many times even Chuck Norris can dodge a bullet.) 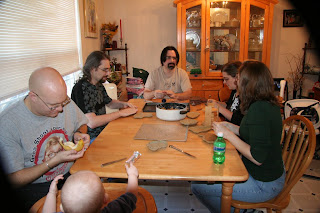 I'm feeling better about myself and how I look. I'm coming - gradually - to see the new, slimmer me.

About 10 days ago, I saw this picture that my friend posted (going around the table from left to right is Chris, Thomas, Evan, me, and Leigh - the very small person at the head of the table is Quinton) of the cookie-making party we'd had. It's not really a very good picture of me, per se - since you can barely see me in it, really - but what astonished me about it is that, for just a moment, I was looking at Leigh (she's facing away from the camera) and thought "Is that me?"

It wasn't, obviously, but the fact that I could think that, and be actually not completely astonished was interesting. I've always thought of Leigh as being "really thin." Stick-thin, I think I've described her. (She's not stick-thin, really, but she is definitely the thinnest person I hang out with... and my standards were all skewed.) The idea of comparing myself to her were, at the extreme, ridiculous. I used to make up nearly two Leighs. And yet, these days? I probably only outweigh her by 10-15 pounds. Maybe 20.

I know I shouldn't do the compare thing; I really wish I could stop playing the Fattest Woman in the Room game. I found myself doing it again at Thomas's office party this weekend (which was mostly as fun as one can expect from those sorts of events. We had some babysitter issues - her boyfriend of three years dumped her that day, and she was sobbing hysterically when she called to cancel on me, one hour before she was expected! - but fortunately, my friend Leslie was nearby and able to pick up the slack for me!) and realized that not only was I not top on that list, I wasn't even in the top ten.

I was talking with one of Thomas's co-workers about my article for MizFit and how sometimes, I think my mother influenced my own eating habits for the worse (I can't blame her for the whole thing, even if that would be nice, because really, she never twisted my arm; she just provided one sort of bad role model... the person I didn't want to be like)... "which is to say, because she was such a head-case about being thin, I grew up to be fat," I summarized. Thomas's co-worker stared at me, her pretty face twisted into an O of astonishment.

"But you're not fat!" she exclaimed.

I cannot remember the last time someone said that to me.

(Realistically, I know I still am. According to my BMI chart, I need to lose ~15 more pounds to be in a healthy weight range. But you know, I'm okay with that. I'm not done with my journey; I won't be done with my journey until the only people to whom my weight matters are the ones who are carrying my coffin.) Still, it felt really good, hearing that.

Time for an awkward transitionitory sentence. (I love doing that, you know. I only wish I could get away with it while writing novels!)

I think I mentioned my shoes, recently... the three inch high heeled boots. Yeah. You know, I wear them most of the time now. I love the way it makes my foot look tiny, and the extra three inches of height give me the optical illusion of being thinner. (If I really was 5'6" instead of 5'3", I'd be at a healthy weight!) I never used to wear heels, even before my car accident. I had a few pairs from time to time, but I felt awkward in them. I'd never really learned how to walk in heels, and I clearly remember one of the last times I wore heels, and I ended up misplacing my foot on a short staircase and badly bruising my dignity. And now? I'm wearing my boots to the grocery store.

I feel sort of weird about it; I used to go on rants about women's fashions that forced women to mangle their legs and be in constant pain in order to try to conform to some impossible standard. And here I am, wearing high heels to do the laundry. (And it's not even like people can see my legs! I'm wearing jeans!) Am I wrong, for now being okay with fashion, since I might actually look good in it? Was I being all sour-grapes before; knowing that I'd never fit in, or look good, it was easy to dismiss fashion (and at the same time, the women who liked fashion) as being silly.

I was working myself up into an extremely tight knot about this; I hate feeling like a hypocrit. I went on a small, self-hating rant about it, and Thomas shook his head at me.

"Six years ago, we used to wait in line to see the Geek O'Clock showing of any movie we were interested in. We don't do that any longer because we have a child. I don't think it was bad that we used to do it, nor is it bad that we don't do it now. Situations change, priorities change. That's called life. You're not wrong for thinking the way you used to, nor are you wrong now. You're just becoming more like yourself. Whatever You that You are now."

(My weigh in was good this week, down another 1.6 pounds, which brings me within spitting distance of 65 pounds lost. If I can drop .2 pounds this week upcoming, I'll earn my 13th star for the year.)
Posted by Lynn at 8:39 AM

Email ThisBlogThis!Share to TwitterShare to FacebookShare to Pinterest
Labels: commenting on life, focus on self, Healthy You, motivational

Chuck Nortis does not dodge bullets; bullets dodge him... ;-)

It's the power of boots really. I love having a good pair of boots. Even the high heeled ones have good ankle support, which pumps do not. It's the only kind of shoe that I would consider spending a lot of dough on.

I like what Thomas says about your thinking, he's absolutely right. We do change, it's life having it's affect on us. Enjoy wearing those boots, you deserve them!

I love what he said there! It's very deep and significant. Well done for having the courage to become more you, Lynne!

I can't wait to wear a fabulous pair of boots with heels! Maybe next winter...

I love consequences. They are Nature's way of keeping us from being stupid ALL the time, instead of just occasionally. :-)

I love the FWITR game...okay, I don't love it. I hate it. But I seem to be addicted to it, too...and I am still angry at myself for so many years of thinking I wasn't overweight just because I could always find SOMEONE heavier than me. Talk about self-deception...also known as Terminal Dumbass Disease.

I love that you're "not done with the journey till..." - that is the awareness that will make this a true change for you, and not "just another diet" (not that "just another diet" brings this kind of success, but as Bob Harper has been known to say, you gotta change what got you there in the first place or you'll end up right back there in the end). And I think that keeping a blog like this makes a real difference in that kind of awareness...you are a shining example of success in those areas.

I'm incoherent today...maybe 'cause it's 4:30 in the morning. Dunno. Anyway, I'm proud of you and I think it's wonderful that you're enjoying fashion with your "new" body. I think it's very natural to be proud of it and want to display it to its best advantage. And you have a very insightful husband too...you two have a lot in common! Which, um, you probably knew. :-)

I'm rambling. I'll shut up now cause I don't think the "book" Miz was talking about was supposed to be my comment...

I've played "the fattest woman in the room" game with myself during the past 5 years - usually at weddings and baby showers.

What a healthy way to deal with the ups and downs of weight loss! Seems like that calm, rational reaction to the occasional slip-up will be really helpful for the long haul.