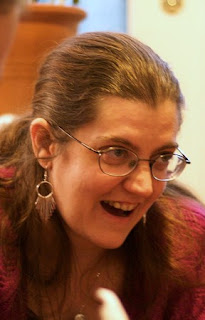 "Hi. My name is Lynn. You might not know me. I live in here in Chesapeake. I'm a stay at home mom. I went to college at William & Mary and majored in literature. I have a love for action movies, science fiction, Russian art, Irish beer, Jackie Chan, and just about anything with cheese on it.

I'm thirty-six years old (thirty-seven in May!) and grew up in Louisa County, Virginia. I used to spend summers in upstate New York with my grandparents. My mother's parents and my dad's parents lived about four miles away from each other, near a tiny town called Peru.

My favorite color is green. 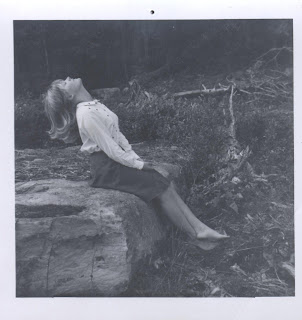 This is my mother. You probably don't know her either. Her name is Cynda Abolt. She's sixty years old and lives in St. Simon's Island, Georgia. She's an historian and a reenactor and a member of the National Park Service. Nine years ago, she married my step-father in an early 19th century period wedding down in New Orleans.

Her favorite poem is The Doormouse and the Doctor, by A.A. Milne. She likes suspense movies, novels by Patricia Cromwell, and has an inexplicable fondness for purple cow creamers.

In October, 2007, she was diagnosed with breast cancer. After surgery and several months of radiation treatment, my mother has been cancer free for a little over a year now.

This is my grandmother, Ethel Stafford. Her favorite color was yellow, and she had a collection of china birds, especially cardinals. During the Great Depression, she was a teacher. When my family visited her, she always made two batches of chocolate chip cookies, one with walnuts in them, for my dad, and one without, for me. She died in 1994 from pnuemonia. She had been a breast cancer survivor for almost ten years after a partial masectomy.

This is my aunt, Beth Anne. We called her Big Beth, as opposed to her daughter, Little Beth. She lived in a log cabin, and enjoyed sailing. She died two years ago from heart disease. She was also a breast cancer survivor.

Betty Poe, friend of the family. Died in 1987 from breast cancer.

I never met my friend Leslie's mother. Brynia died from breast cancer in the mid 90's, before I even met Leslie.

These are women you probably don't know. But I expect if you looked around at your mother, your grandmothers, aunts, and cousins, sisters and friends, there are women you know who have been affected by this disease. Breast cancer is the second most prevalent form of cancer, after lung cancer, and the fifth most common cause of cancer death.

In 2007, after my mother was diagnosed with cancer, I decided it was time for me to get healthy. At that time in my life, I was nearly 100 pounds overweight and had been sedintary for years. In early 2008, I joined Weight Watchers and began a more active lifestyle. A little more than a year later, I have lost seventy pounds and am now in the gym three times a week.

But it's time to do a little more.

In October, 2009, I'm going to walk in the Susan G. Komen Walk for the Cure. It's a sixty mile walk, spread over three days, to raise awareness for this disease and to raise money to help find a cure, better current treatments, and help provide screenings for people who can't afford them.

In order to do that walk, I need to raise $2,300 in sponsorship money. And, quite obviously, train to be able to walk that far."

Here's where I'm asking for your help.

At the moment, I have not actually paid my registration money to walk... I am hoping to get verbal promises for sponsorship for at least half of the money I need to raise in order to join the Walk. Once I get promises for half, I'll pay my registration fee and get an on-line donation form set up. I've gotten permission from my apartment complex manager to post requests for donations to all the residents in my complex. I'll hit up local businesses.

When I raise the money, I'll be blogging/tweeting from the walk so you can share this experience with me.

To this end, I have decided to shelve my C25K training - since really, I'm just not capable of doing that many different kinds of training - and begin working towards increasing my walking endurance.

It's going to be a long walk. I hope you'll join me.

If you are interested in making a verbal promise, please post in the comments how much you think you will be willing to sponsor me for. You are NOT obligated to do so at a later time, but if you don't think you will, or can afford to, please do not promise. When I reach a goal of 50% required donations in verbal promises, I will set up the online donation forms for you to make good! Thank you very much for listening, and for any help you can give!

Update: You guys are AWESOME. Look how far we've come in just a few hours!!

Of course you know I will help out! I can do at least $20 and probably more, but I don't want to promise more in case things don't get as "better" as I hope they will between now and then. :-) So, at least $20.

And I'll be cheering you on all the way!

I will help you out with a small 10-20 on the website. I did the Avon 2 day a few years ago. It was a great experience. I walked 32 of the 39 miles. It is something I will never forget. Train, train, train. I would suggest walking at least 20 miles in one day to prepare yourself toward the end. Not every day but at least once or twice toward the end. I walked 12 miles a day and it was not enough to prepare me for the first day of 26 miles.

What a wonderful way to honor such magnificent women--well, ALL women, really. Count me in for $50 (more if I'm a wildly successful author by then.)

(I'm doing this even though I have serious wii-envy at the moment. *G*)

It's a wonderful thing you're doing, Lynn!

I'm in for $20 - maybe more.
This is amazing. My grandmother suffered from breast cancer and now my mother-in-law is at risk as well.
I will support you in any way I can!

I'm in for $20 (total, not per mile, because whoah, I don't need a Michael Scott supporting Oscar's nephew kind of deal here...).

I'll donate $25, Lynn. I lost my Mom to breast cancer back in '87 - she was only 60. Just let me know when you've gotten the online form set up. Your twitter buddy - Meamergr