Despite some setbacks, I am still working on my self-esteem project.

I keep a little notebook by my desk and whenever I feel good, or do something good, I write it in my notebook. Every morning, when I first get up, I randomly flip through the notebook and see what I've done good recently. I've also been using it to track my workouts and push ups, since both of those things are impressive, and part of my routine (You get self-esteem from just sticking to your workout for no other reason than you ARE sticking to your workout. Interesting how that works, don't you think?) 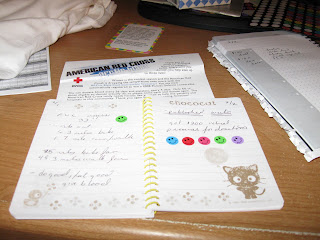 I was, for a while, decorating the pages with stickers, too, but I've started using those stickers for my daughter's rewards for helping me clean the house. Sometimes I think I should get "I done good" marks for successfully implementing a child-chore system that Darcy can and does work well with. (Could that sentence possibly be written any WORSE? No, I didn't think so... ) But that's ok. Sometimes I still dot the page with a smilie sticker if it was a particularly good day.

I've been having a really great weekend, truth be told. Friday I got new pants (in a size. 8!!) Ok, seriously, I cannot get over how good that makes me feel. I knew my 12s were probably too big. Not so much in the waist - or at least, they weren't sliding down off my hips the way my 20s used to. (On the other hand, I waited to size down from 20s until I was in 14s, so you know, there's a bit of a gap there. Also, it seems like the larger the size is, the bigger the difference between that and the next size down. Where a 20 might be really loose, but an 18 is TOO DAMN TIGHT, I can currently get easily into a 12, slip into a 10, I can also get into an 8. Weird, that. Women's sizes are just strange.) Anyway, I went to the shop and picked around in the jeans section. I selected a few 10s that looked nice, grabbed a 12 "just in case" I'd merely stretched out these 12s, and picked up an 8... When I was first starting this weight loss thing, I mathed out... "Ok, it took me X weight to get from size 24 to 18, that means when I weigh 125 pounds, I should be... in 8s. Or maybe just barely into 6s. Wow. Six. Ok, we'll say 8s. So I picked up the 8s just to see how much further I had to go until I hit my "goal size."

And in the dressing room, I slowly took off my 12s, then stood, looking at the jeans hanging up on the wall. And I thought, "Well, I'll try the 8s on and get the disappointment out of the way first." And stepped into the 8s. And slid them up. Over the thighs, over the hips. I thought I'd get the V-zipper "and ne'er the twain shall meet" thing going and was flabbergasted when they zipped. UP. Closed. And no weird muffin-top thing going on.

Now, honestly, they were a bit too long, so I went back to see if I could find 8 petites, but the 8 petites I could find were of a different brand and were, for some reason, slightly smaller in the waist. I could zip them up, but they did do the muffin-top thing, and really, that's just Not Attractive. So I ended up buying the 8 regulars and took them to a tailor to have them altered. Seriously, they are size 8 jeans and I'll be damned if I'm going to look like a refugee from a corn-shuckers convention by rolling them up three times. (They're $60 jeans, on sale for $15, so even paying $10 for someone to hem them for me is still a great bargain.)

Saturday we got together in a group of friends, gamed for a little while, then went bowling. Silly thing, bowling. I was doing really horribly at first, and Thomas - Mr. I-suck-at-bowling - had ranked up fairly quickly with a spare and a couple of strikes. Then, as I got more used to what I was doing (and I did some more visualizations just before I bowled), I got three strikes in a row, at the end of the set, to win the game.

I was pretty psyched about that, too. Not necessarily because I won, although it did feel good to win, but more because my visualization stuff is really paying off. 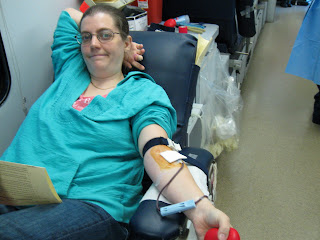 Yesterday, I did Great!

Not just for me, but for other people. I gave blood for the first time since High School. (god, I graduated from high school like 18 years ago...) And in high school, I only did it because as a member of the National Honor Society, I was required to do "community service" and giving blood was easier than picking up trash alongside the highway. (I've done that, too, a few times, and my god, I hate it. And if I ever catch you throwing something out of your car window, I swear to god, do something nasty and unpleasant.)

It wasn't too traumatic, altho the volunteer lady did have to wiggle the needle around a bit to get it in there. It didn't hurt much, but I'm awfully squeamish when it comes to my own blood, and I don't like looking at it. The really funny thing is, I signed up to give blood on Jan 15th, and just three days before my appointment, I found out about this. MaNiC MoMMy is doing another virtual blood drive, so not only did I give blood, but I got my picture taken, and entered for her contest. How cool is that? I was talking about giving blood with my friends on Saturday and my dear friend Leslie said, "Oh, I haven't donated recently," and she ended up tagging along with me, so we both gave. Double bonus cool points!

I've always liked the concept of the Karmic Boomerang. Do something good, get something good back, feel more like being and doing good, etc. (Also, the schadenfreude part of me loves the idea of people who are complete bastards having transmission failure at 3am on Church Street.)

Well, I got whapped with the Karmic Boomerang this morning.

Today, I got a release in my email box for permission to publish the article that I submitted for a magazine a few weeks back.

So, I've had a freaking wonderful weekend.

(I could wish that these things would be a little more spread out so I can savor and enjoy each moment... on the other hand, this buzz will keep me going for quite a while!)

Update, 10:15pm: My weigh in tonight was really good, lost 2.2 pounds (for a change, the husband thing did not outshine me, gaining .4 instead of losing more weight. This is good, since he's still about 5 pounds under his goal weight.) and have lost another daily point, dropping under 150 pounds. Tomorrow will be really busy, with workout, shower, Thomas's haircut, and a trip to the laundrymat, so I wasn't sure I've have time to make a Healthy You post tomorrow. So, I went ahead and did this one tonight.
Posted by Lynn at 8:45 AM

Email ThisBlogThis!Share to TwitterShare to FacebookShare to Pinterest
Labels: celebrations, focus on self, Healthy You, self-esteem

You are an inspiration and you are doing great! Size 8 and no muffin tops! I won some free jeans and I need to have them hemmed too as they puddle on the floor. They are size 6... I can zip and button but with some serious intake of air and big ol' muffin top. Someday soon!

And that's great you donated blood! I donate ever 8 weeks, it's such a simple thing I can do to help out!

Petites do fit differently, more than just in length. The stride is shorter, too, I think.

Kudos to you for giving blood. I need to see when I can give again. Thanks for the reminder1

Congrats on one helluva weekend--all the way around!

You did indeed have a great week! Well done on the loss and the blood donation! I haven't given blood in ages...

LOL about "the husband thing." I have one ofthose who often outshines me on the weight loss (but not lately).

Great job on the size 8s!! I do think you should get extra smilies in you book for implementing the chore routine, good parenting there!

Congrats on the article!

Great job working on the self esteem! I do agree, sizes are completely WHACKED!

Size 8...HOW awesome that must be!

Giving blood is awesome too! I have always thought that I needed to get back into doing that. Thanks to your inspiration, I think I will.

Wow, you know what? This is the first post I've ever read from you, but just from this your self-esteem ROCKS! And way to go on the good karma thing! I am such a believer in that! And you know what else, I can tell you are a really good writer because this was very interesting to me to read the whole way through, and usually I'm a skimmer! AND WOW! What I would do for a size 8!!!

I do want to hear about the article that's being published too!

Happy YOU GIRL! I'm glad you found me so that I could find you! : )

Cammy's totally right; petites are sized differently than regulars, and they are cut to a different shape. Even though I'm only 5'2", I often find that petites just don't fit me right, and if I do find a petite pair of pants that fits well, it's always one size larger than the size I wear in regulars.

Huge congrats on the article, too. That's beyond awesome.

Congrats on your amazingly tiny new size! You've earned it! :)

whens the article coming out? know yet specifically?

IM SO EXCITED for you!!

Hi, I just read your comment on the Tippy Toe Diet and couldn't help but notice that you got a Wii and Wii fit this weekend.

I got mine on 1st Feb (last weekend) for my birthday and I absolutely LOVE it. I hope you enjoy yours tooooooooo.

I find it really works and does actually get me out of breath. Really works my thighs so much (the ski slalom etc.....). Anyway I hope the novelty never wears off as I am really loving it right now.

So many cool things in that post! It's great to read about all your successes; congrats on the size 8. And the blood donation thing is a good reminder--I need to do that too!

Well, that is just universally awesome! I've noticed the size differential in smaller sizes too - I think there's some subtle marketing assholishness going on there, but haven't really analyzed what it is.

Regardless, how very amazingly cool to be in single digits! I'm so happy for you. :-)

I shall feed off your positive energy and use it to help me boost my own, is that okay? You are rocking the whole world lately, sister! I'm so proud of you.

Congratulations on the size 8....never in my wildest dreams would I ever imagine me in a size 8. I'm an 18/20 right now, started at 24/26. You are an inspiration. Thanks for leaving me a great comment.