I've been a little MIA around here...

First, I've got a collaborative blog project here: A bunch of us at Twitter are walking "together" for this Weight Watchers 5K... So, if you're interested in that project, just shoot a DM to @bwjen and she'll hook you into that project. I'm going to actually be physically walking with my meeting group, so's Thomas and Darcy will be joining us as well, altho truth be told, Thomas will probably have to carry her at least part of the way. But our leader, Beth, is going to be setting up the walk so we'll end at the Skinny Dip. That's for Carla, who refuses to work out at all... except where there's Ice Cream involved.

Secondly, I have another collaborative project of my own. The weekly Wii Fit Challenge. It started off with just me and another girl and I now have four or five people who are interested. So, if you're interested in that, just leave me a comment with your email in it, and I'll send you an invite to that project.

So those are my current web projects; at home I'm trying to clip coupons and stick better to a grocery budget. I don't think I'll ever get to the point of some of my web-mommy friends who can feed a family of four on $40 a week, but I'm getting better. I've ordered the newspaper, which is $9 a month and started collecting coupons. Tuesday, when I was at the laundrymat, I took out all the coupon fliers and went through them while my dryer loads were going. Yesterday, I went to the store with $ 7.79 worth of coupons. (the 40 cents off and 50 cents off were doubled, and the B1G1 got me a free packet of tuna fish; normally $1.99)

Now, part of the frugal mommy thing is that I'm not supposed to buy anything that's not a grocery at the grocery store; no shampoo, cat food, lightbulbs, feminine supplies, etc. Those items are supposedly cheaper at drug stores, pet shops, Wal-Mart. I'm sure this is correct, and I am trying to remember (well, except that I won't ever shop at Wal-Mart again... long story.) to pick those items up at other times. Also, it's not always the best deal. Yesterday, the Harris Teeter had a special, buy one box of dishwasher tabs, get one free. Plus I had a coupon for them, $2.50 off. So I got 40 tabs (about 5 weeks of dishes) for $3.49.

On the plus side, I may be well stocked for dinner meat for at least 3 weeks. The Harris Teeter (if you have one in your area, you should go check out this sale) is offering the 2.5 pound bag of pre-frozen chicken breasts Buy One, Get Two Free. That's 7.5 pounds of chicken for $9. Also, last week they had a huge package of beef cubes (stew meat, kabobs, stir fry) on sale for $8 for 4 pounds, so I divided that package up and stuffed it in the freezer. And I have one packet of veal, a pound of ground beef, and 2 packages of turkey cutlets. That's 18 dinners with meat, plus I've got tuna, pasta, and other vegetarian dishes planned. So, while I spent $102 yesterday, I have fed my family for the next couple weeks, only picking up vegetables and produce...

Now, Friday we got together with Leslie and headed over to City View Park to walk and play with Darcy and whatnot. While we were driving there, I commented to Thomas that I was planning - eventually - to walk to Lynnhaven mall, depending on how far away it was. If it's over 15 miles, I wasn't going to do it just yet, but I thought it was about 10-12 miles, so in the next few weeks...

"You could walk to my house," Leslie pipes up from the back seat. "I'd give you a ride home." 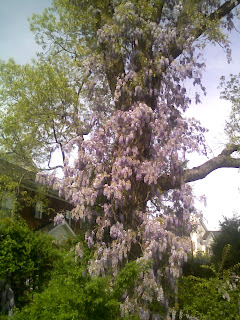 So, Sunday, I mapped it out. It's 11.4 miles to Lynnhaven mall and 8.6 miles to Leslie's house. Since I've missed my walks because of illness recently, I didn't want to try eleven miles, but I figured 8 miles was doable.

I packed my bag (note to self: please, please buy a new bag soon, this one is killing my shoulder...) and headed out. It was a nice day, a little sunny, and about low 70's. The roads had sidewalks the whole way (always a plus) and were just busy enough to make me happy I'd decided to go ahead and wear my iPod. (If there's no sidewalks, I won't wear it... it's not safe. On the other hand, if I'm on the sidewalk and someone decides to run me over, the likelihood that not wearing my iPod will save me is pretty low...)

I passed this tree about 1/3 of the way there and thought it was quite pretty. Actually, it's prettier even than the picture shows, because the surrounding bushes were also covered with these purple flowers. (Yes, I'm sure the owner of the tree and bushes isn't happy about it... I think this purple stuff is one of those parasitical types of flowers, but hey, it's not my yard, and it does look nice...)

However, all the walking I did on Sunday, combined with some high sodium food choices made my weigh in on Monday... not so great. I was up 1.4 pounds.

On the other hand, over the last three days, according to the wii fit, I've dropped 2.4 pounds... stupid water weight.
Posted by Lynn at 9:34 AM

For the record, the pretty flower is wisteria, and yeah, I imagine it can get away from you in the South in rather spectacular fashion, if you don't keep it trimmed. It's a cultivated vine from Asia, popular for growing on arbors, although it can also be trimmed to stand alone as a bush, or trained onto a tree (like you saw). (A little more about wisteria.)

Uhhh- drug stores are the worst! I mean they may have a discounted item here and there, but for essentials- avoid! Then again, maybe it's different in your state. I like the idea of boycotting walmart, but my budget won't listen.

Keep up the great progress.

I go through phases with the coupons, sometimes I use them and sometimes I dont. I've found that I'm doing much better sticking to my budget by ordering my groceries online BUT you do pay a bit more for them. I wind up not buying any extras or items not on my list when I buy online as opposed to going into the actual store.

Hey I would love to join your Wii Fit Challenge! I am sure it would help me get back into the swing of things :)