Attack of the Killer Tomatoes? 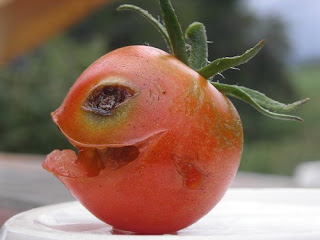 Remember Herman Farbage while taking out his garbage
He turned around and he did see tomatoes hiding in his tree
Now he's just a memory!
I know I'm going to miss her - a tomato ate my sister
Sacramento fell today - They're marching in San Jose
Tomatoes are on their way!

Why is it, you think, that people don't binge on tomatoes?

We're afraid our vegetables will come back to haunt us, whereas a brownie... nice, safe, chocolate-y, gooey thing... would never appear in a bad movie to suck our brains out.

Or maybe it's just that the tomatoes are more obvious about their evil intent. I mean, don't you see them there, nestled in their little clear plastic box from the grocers, sniggering with sinister maliciousness? Ever notice how you slice them up for a salad and they lay there, wedges with smug, bloody grins?

And they have this nasty tendency to revolt in the crisper drawer, turn obviously evil and black with murderous intent...

Whereas the brownies, even when they get a little old, are just that much better? A little chewier around the outside edges, but still gooey and lovely in the middle. And if they're too stale, you can toss them in the microwave, wrapped in a moistened paper towel and POOF! They're back to their young and carefree selves. (I keep being tempted to wrap myself in a wet paper towel and microzot myself back into my twenties... don't you?)

But maybe that's part of their evil plot to take over the world. The brownies, I mean. They just... look good. And deep down, where it counts, they are even more dangerous than tomatoes, even slightly anthropomorphic ones.

If you're thinking I fell sway to the siren's call of brownies yesterday...

Watch out. Maybe I'll get YOU when you're taking out your garbage!

Because, you know, we can't all aspire to be Brownies. Some of us have to be tomatoes.

1. that movie is right up there in my top 20 along with Critters 1 & 2.
2. you're not the only one suffering from the evil brownie plot to take over the world... i've been seeing the remains of brownie takeover in several blogs this morning. Hmm.. the plot thickens.
3. forgive me for not capitalizing my letters. this is not usually like me.
3. kill the brownies, make amends with the evil tomatoes, have an excellent day. =)

HA! You crack me up!

I agree, brownies get better with time but tomatoes get slimey. I was talking with a friend who tried a new recipe for chocolate chip cookies made with chickpeas. She said they definately didn't get better with time. The chickpeas shriveled and got chewy. Not chewy like a the edge of a brownie, chewy like a pencil eraser. Sometimes I wish brownies would do the same things so I could easily keep them at bay.

Ya gotta watch those brownies, they have a way of sneaking up on you!