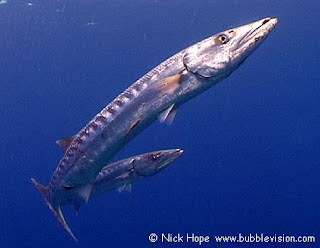 (Subtitle: The Chances of Finding a Barracuda in my Pocketbook are not 0%)

I've thought for years about writing a relationship book, something along the lines of Men are From Mars, Women are From Venus, only, you know, better. And without a stupid title.

The biggest thing, I think, in relationships is communication. And the annoying thing is, most people agree. However, the missing piece of this is "what do we need to communicate about?" Not only that, but when do we need to talk about it.

Thomas and I tend to talk about our relationship issues at night, laying in bed, at 1am. It works for us. The house is quiet, there's nothing else going on, the child is not likely to bother us. The lights are off (never, ever discount the usefulness of being able to say something when your spouse can't see your face!) and we're focused on nothing else except each other. (Although we never, ever talk seriously about our relationship after sex. There's a time and place for everything; post-coital tends to be an emotionally vulnerable time, and it's not good to bring up issues when people are already emotionally overloaded.)

So, we're talking last night - nothing serious. Neither of us had any pressing issues to discuss, but it's been a busy couple of weeks and we just needed a little re-connection time. We talked over one of my issues with my mom (this is an old, old issue, and I don't think it'll ever be resolved unless I'm willing to get confrontational with my mother about it, which isn't likely, because I can't see getting the result I want - i.e., an apology and the admission that she was wrong to do it - and anything less isn't going to do anything aside from piss both of us off); we discussed Thomas's recent spot-bonus at work (an extra grand in "ya done good" money, which we'll get this next paycheck coming up) and what we wanted to do with that money; we talked about one of our friends who is being a complete pain in the ass without meaning to and what we'd like to do about it (we probably won't do it because said friend would not appreciate the interference, but we'd like to); we talked about Thomas's father, who is visiting next weekend.

Talking about Thomas's dad is always a touchy subject. It's like poking a bee-hive. Thomas so desperately wants to not care about his father. Rick... well, I don't know what he thinks; we've rarely spoken. This will be the first time Rick's seen his granddaughter since right before she turned one. It will be the third time I've ever laid eyes on the man. (Keeping in mind that Thomas and I have been together for almost 12 years now).

I let Thomas chew over the matter of seeing him again for a while, then changed the subject. He wasn't really getting anywhere, just spinning himself up.

"You know, I was talking about you the other day to one of my online girlfriends," I said.

"Mostly we were talking about you not being the stereotypical man."

"Yeah. I put the seat down," he snickers. "And I don't mind going to pick up your tampons from the store... I never quite understood that in other guys. I mean, considering that the cashier doesn't care, what you're saying by buying feminine supplies is 'hey, I got a woman at home!' How is this a bad thing?"

"Well, except for one thing."

"You refuse, absolutely, to ever get anything out of my purse."

"If I ask you to get me something, tell you where it is in my purse, what do you do? You bring me the whole purse. I promise you, nothing in my purse is going to bite you."

"Honey, I've watched you pull things out of that bag that you didn't know were in there. I do not want to be the person who discovers you've got a barracuda living in your pocketbook."

"I'm pretty sure there's no barracuda in my purse."

Email ThisBlogThis!Share to TwitterShare to FacebookShare to Pinterest
Labels: commenting on life

This so cracked me up!!!

This describes my hubby too, he will never open up my purse. Heck, I'm lucky he'll bring it to me. He usually won't touch the thing, afraid his man-card will be taken away if he's caught holding a purse.

Hey, a guy has to draw a line somewhere. I don't go into a woman's purse either. There are things in there that are just ooky.

LOL...it's like Schroedinger's Barracuda then, huh? Until you actually stick your hand in and find out...you can't really be sure, can you? :-) (Okay, not exactly the same...I guess whether it's a dead barracuda or a live one would be more appropriate. But still.)

My hubby never goes in my purse either. He just figures there is no way he'll find whatever he is looking for anyways.

I know I can NEVER find what I am looking for in my purse AKA- the Black Hole.

But a baracuda...not 0% LOL that was hysterical!

I just wanted to say you have a very interesting blog, I loved this post!