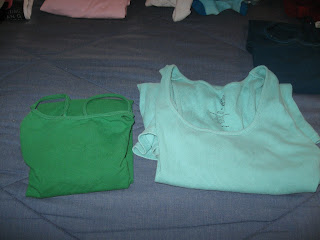 I was folding clothes the other day - a thankless task, honestly (however, folding 1 load of laundry burns approximately the same calories as walking a little more than half a mile... that's JUST the folding, not the lugging about of laundry baskets, loading or unloading the washer, etc) and I was thinking "damn, I have a lot of clothes." Then I was folding up a postage-sized pair of underwear. "And they're all tiny."

Truth be told, it takes me longer to fold the laundry now than it used to. What was a full laundry basket two years ago contained six or seven shirts, twelve or fourteen pairs of undies, a few bras, a couple towels and two or three pairs of pants. (If you're gathering from this that I wore the same shirt several times, you'd be correct. I didn't have that many things that fit, nor were flattering... Also, I was probably depressed. The problem with depression is that sometimes you don't know you're in it until you're not... but the symptoms: I rarely left the house, I usually wore the same baggy housedress five or six days in a row - can you say YUCK with me? I know you can! - were all there... it's only NOW that I'm realizing HOW MUCH better my life is...) And my laundry basket was FULL.

These days, a full laundry basket contains 4 - 5 pairs of pants, two pairs of sweat pants, 10 tank tops, 5 t-shirts or blouses, a skirt, one sundress, 17 pairs of undies, 4 bras, 2 sports bras, 2 sports shirts, my Victoria Secrets bathrobe, 2 or 3 sweaters, 18 pairs of socks (I simply cannot BEAR to wear the same socks I worked out in...), four bath towels, 2 gym towels, and my sweat jacket.

My clothes are just TINY.

On the left side of that photo is one of my cami-bra tops from Express. (I currently have 9 of these things and I still want the espresso brown one, and a few more of the patterned ones.) It's a medium. I tried on the smalls the last time I was there, and while it fit, it also displayed some of the stubborn back fat. Plus the shelf-bra inside it was a LEETLE TIGHT. So, still mediums. I'm ok with that. On the right side of the photo is one of my racer-back tops from Torrid. Right before I started losing weight, I discovered Torrid, and I still recommend them for the plus sized line that actually looks good. Also, their stores are neat, with nice wide aisles (ever wonder why Lane Bryant has to pack their clothes in so tight that you feel like you're going to knock over a display?) and really nice changing rooms. Anyway, I had a number of those tank tops. Size 4XL. That's an XXXXL, just in case you were wondering. (If we wanted to be Roman, it'd be an IVL. That looks better.)

I have an ENTIRE DRAWER of clothes dedicated to activity. Sports bras, yoga pants, sweat pants (I almost called them sweat slacks, except there is NOTHING slack about them... they are Tight as All Hell. I actually have to zip them down my legs... on the plus side, a contractor today from Chesapeake Sidings actually leaned out the window of his truck and yelled 'Nice gams, lady!'... by the way, who the HELL says 'gams' these days?") workout shirts - including my 100 pushups tank because it now has huge sweat stains around the neck and under the arms and is too ratty to wear out in public - sweat bands for my hair, two swim suits (one of them is even a bikini and I look GOOD in it... I am only dismayed that I managed to snag it just at the end of the season and didn't actually get to wear it out to the beach.) and the towels that I take to the gym with me to wipe the sweat off.

And despite this.... I still have two... count them! TWO empty drawers in my dresser.

You know, a size IVL sweater folded up takes up half an entire drawer by itself. I have four sweaters now, folded neatly, in half of one drawer.

Guess I should buy more clothes, aye?
Posted by Lynn at 12:38 PM

Email ThisBlogThis!Share to TwitterShare to FacebookShare to Pinterest
Labels: About me, fashion, maintenance, motivational

I think it is definitely a sign that you need to buy more clothes. Congratulations on your success!

This is the best time of year to stalk the outlet section of figleaves.com for heavily discounted fancy swimwear. I've gotten things for 70-90% off. Paying $10 for a suit that would have cost over $100 is a thrill... having it fit (many things are sold by bra size) is even more of a thrill.

:) Go you! I'm treating myself to some new workout outfits as soon as I can get myself in a store Just love to reward myself with nice ones!

That's so cool that there's a noticeable difference in the size of your clothes, even if it does mean more folding per laundry basket.

So I had no idea folding clothes burned so many calories-- Maybe I should stop wearing the same jeans all the time!

A few years ago I was at a conference out of town. One of my colleagues, who was fat like me, drew my attention to the luggage. Our two suitcases were twice the size of the thin girls' cases! We didn't pack more clothes, our clothes were just that much bigger!

I can't wait to have lots of cupboard space!

How great is this?

And really, it's all relative. I wear large shirts from old navy now and I think they look miniscule. Of course, next to the 3 and 4 xl sizes I wore a little over a year ago, they are.

And it's definitely time to buy more clothes.

LOVE your blog... and congratulations!

I'm a writer for the AOL blog "That's Fit." I'm sorry to contact you through comments, but I couldn't find an email address for you...

I'd like to feature your blog in a new column we're running about weight loss bloggers. Can you shoot me an email so we can talk about it? mjoulwan [at] gmail.

Looking forward to talking with you. Thanks in advance!

Yep, gotta fill those drawers up :)