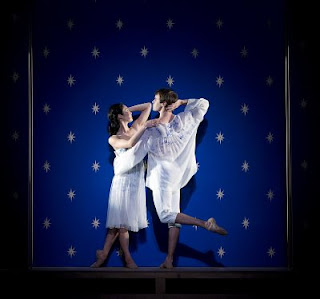 So, Thomas took me to the ballet this weekend; it was sort of combination birthday/mother's day gift.

I haven't been to the ballet in a long time; not since my best friend in high school died. (She fell asleep at the wheel graduation night and drove her car off an overpass. She hadn't been drinking or anything, she was just worn out. And as she was a brilliant, witty, friendly, pretty and talented sort, the whole event went to cement my opinion of the general completely unfair nature of the universe...) Anyway, Tracy used to be a ballet dancer and we (my mother and I) went from time to time to see her in various performances...

A few weeks ago, I was paging through the paper - have I mentioned I subscribed to the paper in an attempt to start being more frugal by clipping coupons? Thus far, it's been a good investment. In three weeks (the paper costs me $10 a month) I've clipped over $18 worth of coupons; and not coupons that I have to stretch to use, either, but ones that are stuff I would have bought anyway - (Ok, that was a very long aside...) Anyway, I was thumbing through the paper and there was an advert for Prokofiev's Romeo and Juliet.

Further investigation (Small bit of trivia about me; I am a russophile. I love all things Russian - well, except politics - decorations, art, music, history, culture. Love it. I minored in Russian History in college sort of by accident. I was just taking classes that I was interested in and my advisor pointed out that all I needed was one speciality history class in a field aside from Russian Studies and I'd have a history minor already completed. My primary professor who taught most of my Russian Studies classes was enomoured of me, said he'd seldom met someone who understood Russian culture as well as I did, and I was the only student in the last decade to whom he'd awarded an A+ on a term paper. This did not, I might add, endear me to my classmates.) yielded the information that this would be one of the first performances of Prokofiev's intended ballet.

"Living people can dance; the dead cannot." This was the rather utilitarian explation offered by the freat 20th centure composer Sergei Prokofiev as to what possed him to alter the fate of literature's most celbrated loves, Romeo and Juliet.1

Simon Morrison, a professor at Princeton University and famed musicologist, discovered in 2003 that Prokofiev's original score included different music and a surprisingly happy ending. Stalin-era censors edited out twenty minutes of music, thickened the orchestration and restored the tragic ending, resulting in a performance that was almost unrecognizable from Prokofiev's opus.

The Virginia Arts Festival is one of the few openings for this new ballet; a master's dream restored. In fact, the performance we saw actually preceeds the ballet opening in New York. For me, this was a once in a lifetime opportunity...

So, I asked Thomas, "If I wanted to go see the ballet, what might you say?"

Thomas frowned for a moment, then shrugged. "I've not been to a ballet since I was in high school, when my sister used to dance. I've no idea if I like it or not. Sure, we can go."

As I'm not a professional reviewer or familiar enough with the ballet to accurately describe the performance, I won't. I'll simply say I enjoyed it immensely, and Thomas's comment was "It wasn't the worst thing I've ever done, and the music was good." That's hopeful enough that I might be able to persuade him to do this once or twice a year. 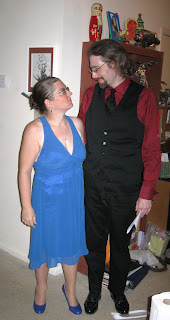 Also, I got to dress up, and that was good.

This is my new dress; a size 6!! My shoes, while they do match the dress nicely, were unfortunately, a half-size too large, and made walking a bit dicey... why did no one tell me that losing 80 pounds would make it so that I lost two complete shoe sizes? I'm now wearing a seven, and all my old shoes are 9s. (Fortunately, I wasn't much into shoes when I couldn't wear heels, so I didn't have to replace too many pairs... in fact, I own more shoes NOW than I did a year ago...)

In any case, I had a good night... I felt pretty and thin for the entire evening, even after the dancers came on stage. And we were very, very close to the stage, so I got a very good look at how thin they were, and while they might be more muscular than I am, I don't really think that Juliet was all that much smaller than I am.

I found myself playing the Fattest Woman in the Room game again, but it was oddly different. I wasn't the fattest, nor was I the thinnest. And strangely enough, it didn't matter. I felt pretty, I looked pretty, and that was all that was important to me.

1. Leona Baker, Romeo and Juliet, Alive and Dancing
Posted by Lynn at 11:45 AM

Email ThisBlogThis!Share to TwitterShare to FacebookShare to Pinterest
Labels: About me, commenting on life, focus on self, pictures, self-esteem

You look fabulous! I don't think I've ever been to the ballet!

You make a great looking couple... and you can tell in that picture that Thomas likes what he sees.

You felt pretty because you *looked* pretty...and pretty amazing! How jealous am I of that plunging neckline?

I'm so glad you had a fantastic night out!

I'm so glad you had a wonderful time. You look lovely! :)

You look amazing - I'm so glad you were able to enjoy a special night with your guy!