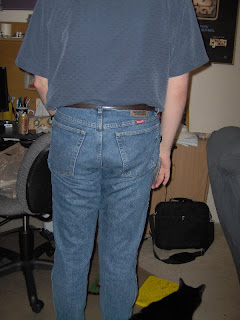 Now that that is behind us... moving right along...

Thomas and I have been on the Core plan for almost seven months now. Which is, honestly, about six months and three weeks longer than I had originally speculated we might be able to do it. From the outside, Core looks highly restrictive, and I couldn't even begin figuring out how to cook with the foods on the list of approved items.

It took a while, but slowly, I've gotten the whole thing down. And I stopped being afraid of food, which is a good thing.

Back on Flex, I got so scared, thinking I'd be hungry at night. That was the worst thing I could imagine was getting to 9pm and being hungry and having no points left. (I know there are a lot of people who preach that you shouldn't eat past 7pm or whatever, but I don't really believe that foods are suddenly more fat-producing after dark, like some sort of caloric-gremlin.) I spent too many days back when I was poor going to bed hungry. I cannot go back there, cannot go back to being that woman in her early 20's who was constantly out of money and food, cannot go back to laying in bed, staring at the ceiling, being hungry, and pretending that she didn't desperately want to cry.

I was so afraid of this happening to me that I'd eat almost nothing all day. Two point breakfasts, four points for lunch, a 2 point snack around 3pm... leaving me 19 points for dinner and evening snacking. Dinner would be 5 - 8 points, and suddenly I have 11 points for post-dinner snacking? I still don't believe calories grow fur and fangs after dark, becoming lycanthropic fat-inducers. And yet, the points I was eating after dinner were not healthy choices. Crackers. 100 calorie packs of oreos. Mostly highly processed flour and sugars. Empty calories.

Of course, Core has some serious drawbacks.

The first drawback is that nothing is easy. If I want something to eat, I have to prepare something. Even if it's just chopping vegetables or fruit (I do NOT bite into apples. I have too much dental work for that, thanks!). Popcorn, I guess, was easy. But for the most part, eating required dirtying dishes. Plates, bowls, pots, pans, knives.

Cooking takes time. This would be why a lot of people hate it. I'm not a lot of people; I like to cook, and I do find the act of chopping vegetables to be soothing. However, even us stay-at-home moms have our off days, and there are days when we run errands and don't get back to the house until 7:30 and everyone is hungry and staring at me to fix this problem, and dinner's at least 45 minutes away.

(I know, if I really wanted to, I should have prepped a couple of extra servings of things, put them on plastic freezer plates, and had Core tv-dinners. I know. I should have done, but I never seemed to get around to it.)

I was having to fix three meals a day for me and family, plus packing away Thomas's lunch for the next day. None of these chores are particularly onerous, but after a time, they do build up to a "Don't I ever get a BREAK?"

(Yes, even I get bored/tired/cranky... I shall leave space here for you to be astonished.)


Ok. Wow, I can hear your sarcasm all the way over here. Impressive. ::wiggles a finger around in her ear:: It wasn't necessary to shout.

Another drawback to Core was this Atkins-ish obsession with avoiding bread.

that he might make thee know that man doth not live by bread only
-- Deuteronomy 8: 2-3 Well, we may not live on bread alone, and we may even be able to live without bread. But my god, I miss it sometimes. There have been many times where I've ached, not for chocolate, or ice cream, but for something as trivial as a cheese sandwich. A bagel. A dinner roll; you know the kind, with butter melting on the top, full and puffy and yeasty.

Bread is fairly high in points, unless it's wheat bread, in which case it's only moderately high in points. (I still find wheat bread to be utterly revolting.) And no, that "lite" and "diet" breads they sell really don't cut it. I don't know why they're the way they are, but they don't toast right, and they just don't satisfy. Using two slices of diet bread on a sandwich isn't having a sandwich, it's using two thin pieces of cardboard to hold your sandwich fillings together. You may as well just dump the sandwich into a bowl with some lettuce, call it a salad and have done.

I've also been missing cheese that contains actual fat. Gasp! I may well combine those things at some point this week and have a grilled cheese sandwich.

But in the meanwhile, I'm going to have a dinner roll.

I was glad we did Flex first, as it taught Thomas and I things like portion control... and I think we both need a refresher in that. I don't know about him, but my portion sizes have been slowly creeping again. You don't have to measure in Core, but I don't know that this is license for unrestrained eating.

And, of course, both of us have slowed down in our losses. Thomas has gone from his 1.5 - 3 pound a week losses back to a steady loss of .8 pounds. I had a nice loss last night, however, of 1.2 pounds, which pushed me over into my 55 pounds lost bling! (yay bling!) But, on the average, my losses have continued to get smaller, resulting in my average weight loss creeping steadily down from 1.8 pounds a week to 1.3 pounds per week. (And over the last 6 weeks, it's barely made it to a pound a week.)

So we thought we'd shake things up a bit, with Flex. We probably won't stay here for more than a week, or two at the most.

oh wow! That picture of the rolls looks soooo good! mmmm! I basically love every carb out there, especially bread! I don't know if I could handle flex. I tried Adkins before and that literally lasted 3 days!

I HEART the processed white---but it doesnt love me.

my thighs and my mood swings.

I so HEART bread! Tried to bake my own, just don't have the knack for bread making. So on occassion, I'll pick a few rolls at the bakers. My treat to me. Portion control was something I had to work on. Found out my portions were Waaay to big. Good Luck with Flex!

I loved this post! I've basically been going through the same journey. I did Core for months and lately tried Flex (or Points as we call it in the UK) to shake things up a bit. It does work but requires a lot of planning and organisation and sometimes more than I can manage depending on my schedule at the time. It did give me a good loss though, and I plan to switch to it when I need the boost or to get real with my portion sizes and controlling snacking more.

Good luck with it, and get that bread while you can! Please have a bagel for me, and tell it that I miss it!

Mmmmm, bread. Don't look at my Spark nutrition logs, lol. I tried flex once before and I too sort of freaked on it. I didn't try core but it sounds interesting. All this prep work from getting out of the convience food mode is tiring but it is so worth it. Very much worth it!! :D

Congrats on the loss! I am slowly losing my obsession with bread. Everything takes time!

Core sounds a great deal like the way I eat, and it definitely requires a lot of work. We've gotten so used to having things we can make easily...and we GOT used to them in the first place because life required it of us. There are still nights when we have something completely unhealthy just because it's the only thing I have time to make...

But you've done so well on Core, and I think you're right in that every so often, you need to change things up and go back to basics. Change keeps you paying attention and it eliminates the boredom factor that tends to make us slip and develop the Creep.

Even as your losses have slowed, you've both still done great. Oh, and very nice butt, by the way! Did you have to sneak up on him? :-)

What a cool site! Inspiring, and I love the little Christmas Challenge ticker thingy!

I totally agree with the thing about calories not growing fangs at night! Have never understood the rules about when you're supposed to eat--other than the MUST HAVE BREAKFAST rule.

Sounds like you've found a way to make each of the WW plans work for you, and you don't have ridiculous expectations, either, like so many people do. Plus with the discipline to follow through... no wonder you're doing so well. Very inspiring!

bread is my weakness. and chips. and vodka. and cheese. dammit.