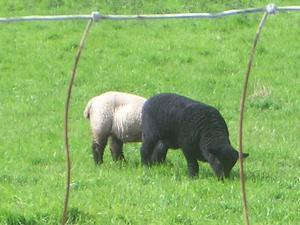 Among other things on my vacationing-to-do list (top of the list was to sleep LATE at least one day, and one day was all I managed, but I did sleep til 10:30, and that's pretty good, so I'll take it. On the other hand, I also got 8 pages of scrapbooking done, watched a couple of adult movies, and had lots of spontaneous, middle of the day sex.) was to go through my old, over-sized clothing and pare things down a little.

I don't think I've ever suffered from the delusion that larger t-shirts made me look thin. I mean, how can you think you look thin when you weigh over 200 pounds? You just don't. But they were comfortable, and for a long time I was very unhappy with the idea of my clothing forming itself around my fat rolls. Not that loose clothing hides that you're fat; just the whole idea that one need not display said fat in saran wrap, not going there thankyouverymuch.

So, I always bought my t-shirts on the larger side. XXXLs. And they were huge. But comfortable. And they hung down around my knees most of the time (I am not tall) which meant that unless I was expecting someone over (and I never am... that's the thing about being a Stay at Home Mom. You Stay at Home. And rarely see another adult.) I could just lounge around all day in said t-shirt. So, I did.

Then I discovered the house dress... t-shirt material, calf-length dress. Loved it. Lived in it.

Somewhere... in the losing weight process... larger t-shirts stopped being so comfortable. I honestly couldn't tell ya when, or why. Just found myself plucking at a shirt if it was too big... shuffling the larger tees to the bottom of the drawer and only wearing the newer, smaller ones. Of course, I also dug out several L and XLs that I had saved away over the years... t-shirts that had some emotional reason to keep, even though I couldn't wear them anymore.

Thomas watched me grow this geological wonder of t-shirts, squashed into a drawer that really wasn't meant to hold over forty shirts. "Do you think, maybe, we might consider getting rid of some of those old clothes of yours?"

Thomas, by the way, is not a packrat. He has never been a packrat. He does not generally have emotional investment in things. Unless it's an old computer part, and I have learned my lesson there. I do not nag about his leftover computer parts. I've had my system salvaged until we can afford to get a new part - monitor, power supply, hard-drive, cd-rom, etc. Usually this happens about two weeks after I've said he should do something about the growing pile of salvaged computer parts. If I was of a more suspicious nature...

Anyway, throwing out stuff is not something Thomas has a problem with...

Me, I do. Less than I used to, but still. My mom... well, let's just say that my mom claims to have stayed married to my dad for as long as she did "for my sake." Yeah, great, let's just blame ten years of unhappy on the child, shall we? "Well, I just thought it would be better for you..." Oh, horseshit, woman. You stayed because he had money and you were scared of being poor. And you stayed so long and you were so miserable that by the time you finally left, you were too eager to get away to make a good fight for a divorce settlement. And you've been mad about it ever since, so will you just shut up already? By the time I left for college, things were abysmal around my house. I never went home for vacation if I could possibly find a friend to leach off of. (Thanks, Carol!)

The summer before college, my mom came into my room, looked around at all my stuff and said; "I'm going to use this room while you're gone for a crafting room. Anything you don't take with you, I'm going to throw away." She meant it. The week after I moved out, my mom set up my old bedroom as her bedroom, so she didn't have to share a bed with my dad anymore.

So... my freshman year, I dragged every bit of my shit from my hometown to my college. And then during the summer, I packed it all up, moved it into storage, moved it into a summer-school dorm, changed dorm rooms, moved it back into storage, and then out of storage and into a new dorm, halfway through that year I changed rooms again... I had nowhere else to leave my stuff, and I got obsessively attached to it. I'd gone through so much trouble to keep it, so much emotional pain... I just couldn't get rid of it. Not now. Not after all I'd been through for it.

The last bit of my college career, I actually had the same boyfriend for like, three years. In that time, we'd acquired a lot of community property stuff. And not since moving out of my hometown and knowing anything I left behind was considered trash and tossed, was anything so hard. Two days after he moved out, I had to go through all of "our" things and decide what was his and what was mine. Split up comic book collections, decided which CDs belonged to whom, which movies, which books... I believe (probably incorrectly) that I was fair about it, that I didn't keep anything that wasn't legitimately mine, and that I divided the stuff up as best I could. I never, ever want to do that again.

In further fact, I almost didn't let Thomas move in with me, when we got to that stage of our relationship, because I was so terrified of this intermingling of stuff. Finally, in a fit of desperation, Thomas grabbed a notebook and scrawled out "If I leave you, you can kill me and keep all the stuff. Thomas." and tacked it to my fridge. It stayed there for the two years we lived together in that apartment.

I still have that "contract."


Anyway... Thomas has been watching me, for weeks now, living out of, perhaps, less than one quarter of my entire t-shirt drawers (yes, that's three drawers of shirts. And my new shirts were taking up, maybe half of one drawer...)

"Ok, time to pare down," he says, leaning against the door frame and looking at me over the rim of his glasses.

"I just... don't feel comfortable with it. I mean, what if I get fat again? It's not like I haven't gained all that weight back before."

"So, then I'll just have to buy new clothes all over again."

"How much clothes do you think you need?"

"Minimum?" I do some calculations. "Fourteen pairs of socks, fourteen pairs of underwear, three bras, twenty t-shirts, two sweaters or cardigans, four or five pairs of pants, ditto on shorts, and one or two nice dresses."

"And how much will that cost?"

"So, the smallest storage unit we can rent is $70 a month... I think it'll pay for itself if we have to buy more clothes rather than continuing to store all these things you're not wearing."

"I'm willing to take the risk that we'll need to buy new clothes again. I'm not willing to watch you attack your dresser every day with a crowbar trying to shove more shit in there. Pack. It. Up."

So... we did. Everything 2X or larger. My new t-shirts from Jeanne with the Jane Austen quotes? Gone. My lesbian t-shirt ("Sorry I haven't been attending church recently. I've been busy practicing witchcraft and becoming a lesbian.") gone. My Lynchburg Storm t-shirt that was a gift from L.G. for designing his web page? Gone. The tank tops I got last year? Poof. Black dress with cherries on it? Gone. The dress I wore to my cousin's wedding. My house dress. The $180 adorable pink dress that I managed to find on sale at TJ Maxx for $14? Bagged.

I set aside one shirt, a 4X and one pair of pants, size 24, for later pictures when I reach my goal weight. Everything else was bagged up. No, I'm not the only one. Thomas did a similar paring down of his clothing, including several pairs of work khakis that were entirely too big, and a dozen shirts or so.

We filled three large trash bags with our old clothes. And yesterday, we took them, along with our old DVD player, and our old printer, to the Goodwill.

"Thank you, so much," the guy at the Goodwill said, as he was sorting things into bins at the drop off. "This'll really help some people."

"It already has," Thomas said, putting his arm around my shoulders.
Posted by Lynn at 8:50 AM

Awwww, that last line kind of got me.

While Im not a pack rat, I do tend to let things pile up for a couple of years until I can't stand it anymore and throw it all out.

Hmmm, maybe I am a pack rat.

Oh, nice... our house hold is opposite of yours. I love to get rid of my things and The Husband is the total packrat.

And really, doesn't feel great to pass on the old things? You have to make room for new things to come into your life so out with the old!

I'm so PROUD of you. As a fellow "saver", I know how difficult it must have been to let all that stuff go, but you did it. I'm happy for you (and Thomas), but I'm also happy for some "big girl" who's going to find some really great t-shirts at an affordable price!

This is a huge NSV--congratulations!

As a fellow saver, I definitely understand and can empathize with your reasoning!

big NSV and what a great man you have there.

and its what they say.

we attract what we are.

youre pretty damn awesome as well.

I am also a fellow saver but have gotten much better in the past few years. Good job for uncluttering your life, even if just a little bit. And no, you are not going to gain the weight back!

Oh, Lynn, this is just wonderful! Not only for decluttering - which, as a fellow "saver", I understand is hard - but also for making that commitment.

To me, the loss of weight started to feel "real" and permanent when I was able to get rid of the first batch of clothes. I'd decided that as soon as they were too big, I was getting rid of them so I'd never be able to afford to gain the weight back...

And money aside, I have complete faith that you will absolutely spend that $400 - but you'll be spending it on smaller clothes, not larger. I'm certain of that.

I'm a "thrower awayer". I've only kept one pair of pre-weight loss pants as a reminder. The rest has all been donated. I don't want to have clothing on hand in which I coudl fit should I start gaining. Good for you to give it away to a good cause.