There Ain't No Such Thing as a Free Lunch.

Moon is a Harsh Mistress, Robert A. Heinlein

My husband has now lost almost fifty-five pounds. He's wearing a medium-sized shirt, which he has not been able to do since high school. And size 36 pants, which he says he can't remember ever doing. He weighs 198.

His friend at work, the one who does the Ironman competitions, promised to take him out to lunch when he got to less than 200 pounds.

Why does this just seem like a contradiction in ideas, to me?

He... lost weight. So you're going to take him to lunch?

It seems like making a chocolate cake part of my reward for losing five pounds.

There Ain't No Such Thing as a Free Lunch. Greg Mankiw described the concept as: "To get one thing that we like, we usually have to give up another thing that we like. Making decisions requires trading off one goal against another." To get his "free lunch", Thomas has given up eating cheeseburgers and moonpies and twinkies for eight months. To get his "free lunch," we walk over 6 miles a week. We play tennis, and climb hills, and run around the front yard. For two Computer Chair Eclairs, this has been impressive amounts of activity.

We dropped Darcy off with my parents this weekend. Remember I told y'all that my dad said he'd gained 25 pounds? I could tell.

"You know," Thomas says to me last night while we're in bed, waiting to fall asleep, "I was surprised by something this weekend." 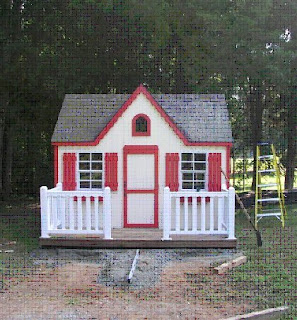 "When we were playing with Darcy?" I grinned. My dad and Thomas had taken turns playing "monster" while Darcy ran shrieking and laughing in circles around her new playhouse.

(Look at that thing! My god! And Rosie, my step-mom, has put in a paved brick walkway, stepping stones, a small picnic table behind it, flower boxes under the window... ok, maybe I'm not the only one who never had anything like this as a girl, and Rosie is acting out her own prepubescent fantasies.)

Keeping in mind that my dad lives and works on a farm, that he's always been completely whipcord thin and fit as a fiddle... he's the man who ROWED us back to his beach house when the boat ran out of gas...

"Impressive." I rolled over. "His elliptical had dust on it." I borrowed the weight bench while we were there to do a few sets. (I used the seven pound weights, which is four pounds more than my at-home set of weights, and was pleased to see I could manage them easily. Maybe I should get some new weights.)

To some degree, I find it sad that we're competing, even mentally, with a man who's almost 25 years older than we are. On the other hand, everyone's got to start somewhere. So we started at the bottom of the hill; so what? The rock hasn't rolled over and crushed us yet. Between the pair of us, we've lost over 100 pounds. He's down 54 pounds, and I got my 45 pound bling yesterday. (That pesky pound was, indeed, evicted, along with 2.8 of his friends.... biggest loss I've had in quite a while.)

But there ain't no such thing as a free lunch.

Email ThisBlogThis!Share to TwitterShare to FacebookShare to Pinterest
Labels: commenting on life, dieting, family, Healthy You

Free lunch?? Sounds like a really expensive lunch, but well worth it!

Congrat to BOTH of you on your amazing losses! you are really doing amazing! Keep it up! =)

Hi there... i'm a first time reader to your blog.

Congrats on yours and your husband's 100 pound weightloss...that's totally amazing.

Good luck in your journey and I look forward to visiting often.

Wow! A hundred pounds between you. It's hard work to lose weight. Don't let anyone tell you otherwise.

And that's what I keep trying to tell people in my life--it's a system of exchanges. Maybe I'll just them here instead from now on, and just maybe they'll get it through their pointy little heads. :)

Y'all have done so well on your journey! Congrats!

Great job--both of you! I have a hubby who hardly gains any weight and seems to lose it so easily--sometimes I wish he could appreciate the work I put in just to lose a few pounds. It's good you can understand each other!

I love that playhouse!

Thanks for your comment on my blog. Nice to 'meet' you. Have just discovered yours & really like it so am adding it to my reader. Look forward to catching up from the beginning.

What a beautiful playhouse!!!

It's amazing how often food is used as a reward.

love the playhouse...my twins enjoyed the one at my parents' house last week when we house sat for them in the country. I think you and your hubby rock! Way to go and doing it together is awesome :)

Wow, congratulations on all your hard work and your weight loss!

It seems obvious, but so many people don't get the "free lunch" concept. They go chasing after "quick easy" solutions like pills or fad diets, but don't get active and don't eat healthy and never end up losing any weight. It's a series of tradeoffs and of lot of hard work, but it's worth it!

Lynn, hurray on the healthier version of the two of you! You guys are inspiring! Congrats on the new bling, you've worked hard and earned it.

Congrats on your new BLING & the weight losses for both of you! You've given up a lot & gone thru a lot, but, it's worth it!

what resonated with me the most is EVERYONE HAS TO START SOMEWHERE.


and you STARTED. are going. THATS the most important thing.

Truly enjoyed your post! You are absolutely right - there isn't such a thing as a free lunch!

Love the total weight loss - that's fantastic! And as for competing with someone older...think of this way: you said he was a role model, of sorts - he rowed, he works on a farm, etc etc. And now you can outlast him.

That's phenomonal, especially for two "computer chair eclairs" (which I totally love!). It's not competition, it's realizing that you can do better than what you always thought was the best you could be.

You two are doing fantabulous! Good for you. I can't wait to keep reading about your progress.

It's strange, how we all do that. Reward ourselves for weightloss (or any other personal goal) with the promise of food. What is up with that!?

Congrats on all you've lost!

That playhouse is really cute.

Congrats on the weight loss!